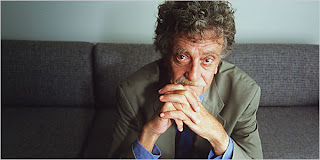 above is his desired epitaph

The great Kurt Vonnegut died last night and while watching the news we are still subject to the Duke Lacrosse trial, Ana Nicole's baby's daddy and the continuance of the non story of the Don Imus remarks (hey media and black leaders- can you go after Beck, Limbaugh, Savage and Coulter who make worse remarks on a regular basis?).

You are telling me that the death of one of the great icons of the 20th century and one of its 4-5 greatest authors does not deserve more play than Imus? While I know he had a wonderful life, I am saddened by the knowledge I will never see another interview, oped piece or writings from this classy gentleman. I am glad I am still able to spend time reading his protege John Irving.

My favorite memory of Vonnegut is from the Rodney Dangerfield film Back to School. Dangerfield's character hires Vonnegut to help him write a paper on Slaughterhouse 5. His teacher gives it an F stating that the author obviously knows nothing about Kurt Vonnegut or his writings. Classic! An important author who parodies himself.

Take the time to read some of his writings, even if you don't read his novels. Read about his experience during WWII as a POW during the bombing of Dresden or his latest book A Man Without A Country, a collection of essays.

Read one of his last interviews, with Rolling Stone here.

Here are some great quotes (take the time to read them);

Kurt on humanity "We're terrible animals. I think that the Earth's immune system is trying to get rid of us, as well it should."

Kurt on evolution/ ID "I do feel that evolution is being controlled by some sort of divine engineer. I can't help thinking that. And this engineer knows exactly what he or she is doing and why, and where evolution is headed. That’s why we’ve got giraffes and hippopotami and the clap."

Advice for young people "What should young people do with their lives today? Many things, obviously. But the most daring thing is to create stable communities in which the terrible disease of loneliness can be cured."

On Supporting the troops “In case you haven’t noticed, we…dehumanize our own soldiers, not because of their religion or race, but because of their low social class. Send ’em anywhere. Make ’em do anything. Piece of cake.”

On Why we are here "I tell you, we are here on Earth to fart around, and don't let anybody tell you different."

On politics "There is a tragic flaw in our precious Constitution, and I don’t know what can be done to fix it. This is it: Only nut cases want to be president."

On Christianity and politics "For some reason, the most vocal Christians among us never mention the Beatitudes. But, often with tears in their eyes, they demand that the Ten Commandments be posted in public buildings. And of course that’s Moses, not Jesus. I haven’t heard one of them demand that the Sermon on the Mount, the Beatitudes, be posted anywhere.
"Blessed are the merciful" in a courtroom? "Blessed are the peacemakers" in the Pentagon? Give me a break!"

On art and writing "If you really want to hurt your parents, and you don’t have the nerve to be a homosexual, the least you can do is go into the arts. But do not use semicolons. They are transvestite hermaphrodites, standing for absolutely nothing. All they do is show you’ve been to college."

Kurt on death "(Speaking at Isaac Asimov's funeral) Isaac is in heaven now, that was the funniest thing I could have said to a crowd of Humanists. God Forbid, Should I pass on sometime, may all of you say that Kurt is in Heaven too."

And finally, Kurt on himself "You realize, of course, that everything I say is horseshit."

most quotes from Wikiquote's Vonnegut entry.

yeah, it's bizarre, you go to cnn.com right now and it's not even on the front page! but thankfully we know about 2,000 stolen wedding gowns being seized at the border.

NPR has done a pretty good job of talking about his death and life. but even they have been all busy about Imus.

they shared some quotes, one that i thought was good was something to the effect that celebrity protests are as effective as cream pie.

Thanks for this post. You did a swell job of giving a glimpse of Vonnegut's personality and style. I'll send my readers your way.

I can't believe i missed this. Guess that exemplifies what you are talking about regarding news media. This hits me especially because i am reading Timequake at present.

And yes i totally agree about the Back to School cameo. Especially when his teacher says, Whoever did write this doesn't know the first thing about Kurt Vonnegut.

Yes, Rick. Vonnegut was a masterful (and one of the funniest) authors I have read. His writings consistently sharpened my faith and brought laughter to my life. Ironically, A Man without a Country was on my list and no one has bought it for me. With my 40th approaching (as well as number 4) I doubt it will make it into my collection.

Thanks for the post. I never got around to doing one.