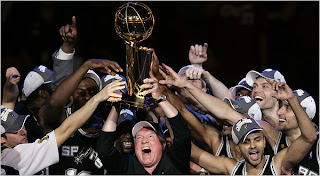 I would like to offer my sincerest sympathy and condolences to the fans of the Dallas Mavericks who were crowned NBA Champions at mid-season, the Suns fans who were secondary Champions (and the only competition for the Mavs).

I would like to congratulate the Cavs fans on getting farther than you ever should in a very flawed Eastern Conference with the easiest road ever to the finals.

I had predicted the Spurs to win the Championship around February, while everyone was crowning the other teams NBA royalty. How could they ignore a team built to win, not to impress with flash. I had predicted this series would go 5, with one victory by the Cavs (oops).

If this is the last of the Duncan era before Prince James (or should I call him Earl James) begins his reign, then so be it. Just call me when you have multiples Nash and Dirk fans!
Posted by DJ Word at 15.6.07

hell of a series we had there! Why are the conference finals always SO much better to watch?

I will admit that yes, of course the Spurs were a much better team than the Cavs. But that is all I will admit.

not true. you TOTALLY wanted to say "i told you so: