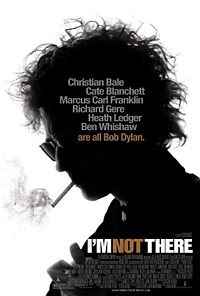 A couple of weeks ago, I had mentioned on my facebook status that I was still trying to figure out the Bob Dylan movie and people wanted to know about it, probably because it sounds just intriguing enough to make people interested, yet just just weird enough to scare people off.

I started this posting and promptly forgot it for 2 weeks- sorry. However, I went with 2 friends, one of whom is a fan of experimental film to see this. I must say that it is very effective albeit a bit too consciously alternative. While no means a traditional film experience, it has an impact. It is an abstract painting taking elements of the Bob Dylan story to explore the impact of celebrity, the multiple manifestations Dylan (and all celebs) created during the height of his career and the expectations an audience has of its icons as they develop and grow in front of us.

3 things stand out in the film. While not all stories and performances were equally compelling (esp. Richard Gere's Billy), it has been noted elsewhere that Cate Blanchett is phenomenal as the androgynous drug addled mega star struggling to find his place as an artist and tabloid fixture. The audience forgets they are watching a woman and becomes enraptured by her playful and self abusive (as well as verbally abusive) manifestation spiraling into darkness (Ray or Walk the Line type melodrama if not handled with panache). This is the best performance I have seen in a film so far this year.

Secondly, Christian Bale, while entirely too buff and classically handsome to be Dylan, creates an impressionistic image of the archetypal protest singer, equal parts Dylan, Guthrie and Seeger. He has Dylan's vocal stylings and mannerisms down pat, but the performance transcends Dylan and takes on a life of its own. Plus, he is wonderful as the "Christian" Dylan, Pastor John, preaching fire and brimstone and singing glorious gospel.

Finally, the greatest strength I'm Not There is the music. The film reminds us of the strength of Dylan's words, as well as his performance. As a teenager I was repulsed by his voice. It was not until I was in college that I understood the beauty of Bob Dylan's singing. I am glad the film does not just take us through Dylan's Greatest Hits and finds much of its power through the obscure, but equally compelling music of his early days (even the title of the film is from a song that has never been "officially released" by Dylan). To hear the voice we know singing songs we are not entirely used it is a masterstroke by the director (Todd Haynes) as is his careful inclusion of cover versions by famous artists as well as actors in the film. The best are Tombstone Blues by Richie Havens and Going To Acapulco by My Morning Jacket's Jim James.

While the film is not for everyone, Dylan's music is. If you are not a Dylan fan, take the opportunity to buy the film's soundtrack to become acquainted with his music by artists you know. Better yet, buy The Essential Dylan. If you are more adventurous, get hold of Highway 61 Revisited and Blonde on Blonde. If you want to delve deeper (which you should), try Blood on the Tracks and the criminally underrated Street Legal. If you want to hear one of the coolest "Christian Music" albums ever, find Slow Train Coming. While I enjoy his later output, it still pales when compared to these classics.

Inspired by the film and reminding you of my credentials as a music snob, I will now give you my Top 10 Bob Dylan tunes (no, these are not his "best" in all cases, but ones which speak to me and I enjoy immensely). By the way, this could change tomorrow.

10. My Back Pages from Another Side of Bob Dylan
9. Maggie's Farm from Bringing It All Back Home
8. Things Have Changed from Wonder Boys Soundtrack
7. I Want You from Blonde on Blonde- maybe his best pure love song
6. I Believe In You from Gotta Serve Somebody- sang it in church as a kid
5. Subterranean Homesick Blues from Bringing It All Back Home- On the right day, this is probably my favorite, but today it is #5. "You don't need a weather man to see which way the wind blows" is one of the greatest lines ever and a send up of his own Blowin In the Wind.
4. Tangled Up in Blue from Blood on the Tracks. I would watch a film of this story song even if Hootie and the Bluefish almost ruined the song by referencing it.
3. Gotta Serve Somebody from Slow Train Coming- "you may call me Zimmy." Humor, Pathos and Conviction in the coolest gospel song ever.
2. Like a Rolling Stone from Highway 61 Revisited- yeah, it is that good.
1. Hurricane from Desire. As you can see, I love ridiculously long story songs. I am a sucker every time, whether sung by Josh Ritter, Bright Eyes or BRUUUCE. This is the story of Rubin Carter, made famous in the film of the same name starring Denzel Washington. It is a tour-de-force performance of unbridled passion, one of the best protest songs ever sung.

*Yes, I love Desolation Row, It's Alright Ma (I'm Only Bleeding), Everything's Broken, I'm Not There and Political World. I love his gospel songs Saved and Pressing On. However, the hardest to leave off was Stuck Inside of Mobile with the Memphis Blues Again-in fact I had better post now, before I exchange it with #6.

and for your pleasure, Weird Al doing Dylan on YouTube.
Posted by DJ Word at 6.12.07

yes! i've been waiting for this, rick. i think you've nailed the critique... the one thing i would add, as a man formally trained in the cinematic arts, is that its true strength lies in the (un)treatment of its subject. The power of cinema lies not in its superficial link to realism (as in the photograph being closer to reality than a painting), but in the grace that arises like a phoenix when dead image rubs up against dead image. Robert Bresson reminds us the that the deader, or flatter, the image, the greater the transcendent disparity. I'm Not There is a film that knows its strengths as a film. Its self-reflexive approach creates a prismatic melange--a poetics of imagery, if you will. Werner Herzog says documentaries are the "truth of accountants". Ken Burns crunches numbers. Todd Haynes seems to know the difference between facts and (poetic) truth.