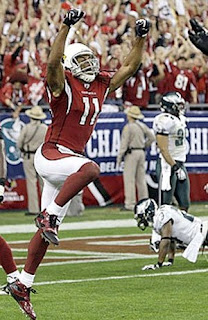 To be an Arizona Cardinals fan is to be a happy person today.
To be an Arizona Cardinals fan since 1975 (or so) is to be an even happier person today. I almost cried last night (but stopped. my kids already thought I was a little nuts stomping around, freaking out, barely able to breath, etc.).
To be an Arizona fan that has lived with Cowboys fans, lived in Cowboys territory, suffered through lost seasons where we were mathematically eliminated from the playoffs by the 3rd Quarter of the Season's 1st game, seen great draft picks bust here and excel elsewhere (Hearst, Rice among the names), watched a team leave St. Louis because they were such a failure the town did not want them and have to have secondary teams to watch and cheer so I could get though the season (thanks to surrogates like the 49ers, Bucs, Patriots and Packers over the years).
I have listened to or watched drafts yearly since the mid-80s, each year thinking we got our hands on someone that would put us over the hump or watched the hiring of a new coach, wondering if the Bidwells had finally found the right man and would give him the talent and patience needed. I have suffered through embarrassing losses and watched upstarts end up winners, always wondering when our time would come.
I have thought Neil Lomax, Timm Rosenbach, Jake Plummer and Mat Leinart were the potential savior of our franchise, thinking one of them could reach the level of Jim Hart, my childhood QB. I would have never guessed it would have been a 37 year old castoff. I have seen great receivers lost in the desert heat and am seeing the emergence of possibly the best receiver to ever play the game.
As a child I remember the embarrassment of the 1977 Thanksgiving game in which the Dolphins (my other favorite team at the time) beat up on the Cardinals 55-17 (I have never forgiven the Dolphins).
I have physically watched them lose in Washington, Dallas (3 times) and Tampa. I have driven 20 hours straight to watch them beat a supposedly superior Redskins team in Tempe on a missed field goal and on television I have seen them win 1 playoff game before this season.
And I have seen a team no one respected or thought should be in the playoffs beat 3 favoritesto take their deserved place in a Super Bowl!
This week I will give you a couple of more such reflections because I deserve this as someone that has stayed with a pathetic franchise while the rest of the world jumped on the bandwagon of a winner (yeah, Dallas fans I am speaking to you- even if you picked them at 5 or 6, you were backing a winner).*
I know this hill is high to beat the Steelers, but we have persevered so far this year. We can attain it. I, for once, am happy about my own team. I can cheer for the team I have always wanted to see in the game (in Tampa).
BTW, find me tickets. I deserve them and live less than 5 miles from the stadium.
*Bucs fans pre Dungy are exempt from this judgment.
Posted by DJ Word at 19.1.09

dude, you can totally get in. dress preppie, park yourself next to the highest dollar valet lot you can find and wait for a corporate exec who's a little soft in the head.

it's not all that difficult.