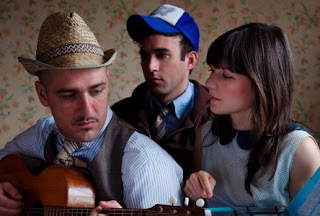 The above picture tells you all you need to know about the album. Also, if you came straight here, please read my caveat (here). That is Sufjan Stevens lording silently over the background while The Welcome Wagon play "their" songs...

If Welcome to the Welcome Wagon were to be murdered, the police would not arrest the Welcome Wagon, they would arrest Sufjan Stevens whose fingerprints and DNA are all over this album, leaving the husband and wife team that are The Welcome Wagon relegated to supporting cast members in this Sufjan Stevens proxy project which will tide his followers over until he decides to release his latest state themed Epic (probably New York).

Plus, I love Sufjan. I really do. However, he is the Neptunes of Christian Indie Rock. When you hear something he produces, you think of him, not the band. This is one of the marks of artist produced albums that I do not like. Too often a musician forces his musical vision and desires on the artist he is producing, often to the detriment of the artist coming to him for help. This was common with a man Sufjan reminds me of. Back in the 80s, Christians had another immensely talented and supremely original musician that happened to grace the Christian ghetto because of his faith. Charlie Peacock, who would have been as popular and praised by Pitchfork and Stereogum had the Internet existed, made truly wonderful albums and decided to start producing. Everything he produced for a long while sounded like a Charlie Peacock album with other singers as opposed to an album by the artist with Peacock flourishes.

Anyhoo, back to the album. It is a decent folk pop album I will listen to for a while. I like the Mamas and Papas approach to Half a Person and appreciate the guts to reinterpret the Velvet Underground’s Jesus, one of the greatest songs ever written. The lyrics are simple, but not simplistic- the marks of good gospel and folk. Sufjan’s production, while overwhelming does allow the songwriting to shine and there are some great (although derivative) songs, such as Sold! To The Nice Rich Man (which sounds like a Sufjan song title) and American Legion, along with the Jesus cover.

So, if you are a Sufjan Stevens fan and need something to hold until til his next album, buy Welcome Wagon. If you like this type of music and don’t know Sufjan from Adam, buy this album. If Sufjan gets on your nerves, run away fast. And, if you wish this was a Welcome Wagon album and not a Sufjan proxy, then listen and make up your own mind.

well i think they probably have cool music because i really like her hair. :) how's that for shallow...

Fair review. I'm choosing to enjoy this album on the assumption that Thomas and Monique are happy with their art being Sufjanized. Would be interesting to hear them live to discover the differences.