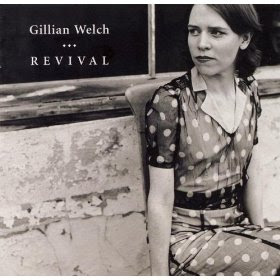 When my friend Laci sent me the news of one of Amazon's best mp3 deals, I knew I must share with you. Gillian Welch's masterful 1996 debut, Revival is only $1.99 at Amazon. This T-Bone Burnett produced effort is a stunning album that will transport you from wherever you are sitting to a porch in Appalachia through her heavenly voice and hymn like renderings of songs you will think you know by heart, even if it is your first listen. The production is sparse and the lyrics are achingly beautiful, just like the area of the country and the bygone era Welch wishes to conjure. Calling her neo-traditionalist misses the mark. I see no "neo" in her music on this album (that does come later).
While it is not her best album, it is the first from a solid artist that chooses to release albums at a frustratingly leisurely pace. If you have only heard her as one of the sirens from the O' Brother soundtrack, expand your musical palette with this appetizer before moving on to Hell Among the Yearlings and Time (the Revelator). The song Orphan Girl is one of the best first exposures I have heard from an artist, right behind debut singles from Pearl Jam and select others.
By the way, our daughter Gillian is not necessarily named after Gillian Welch, but she was a consideration when choosing the name.
Posted by DJ Word at 16.2.09

Love these songs. Amy almost cried when she thought we weren't going to get into the Variety Playhouse to see her show a few years back. We did get in. The show was simply one of the best performances I have ever seen and heard. David Rawlings played guitar with her on that tour. The two of them playing songs from Revival, Hell Among The Yearlings and Time (The Revelator) was everything that is good.

Thanks, Laci and Rick. I'm listening for the first time right now.

BTW, this recommendation exposed a bit of my ignorance. For some reason, I thought Gillian was in the Be Good Tanyas (I was only about 10 years and country off). Do you know BGT? They are some great Canadicana.

frustratingly leisurely to be sure. her last album was released in 2003, right before i moved to kansas city. come ON, gillian. you're KILLING me...