Listen to This Now: Hospice by The Antlers 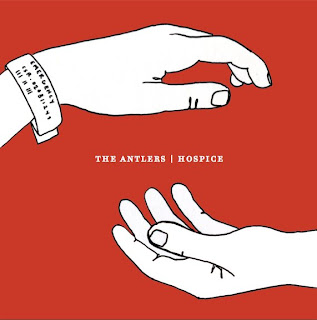 Robin Hilton of NPR's All Songs Considered mentioned on their blog that 2009 was already a much better music year than 2008. Considering the lack of great albums in 2008, this is not hard. He spoke of the obvious contenders, including U2, Animal Collective, Andrew Bird (overrated), M Ward and The Decemberists, along with some surprises, including what he considered the best album so far, Hospice by The Antlers.
Intrigued by the album name, I decided to pick it up. It is nothing less than stunning. An amalgamation of Sigur Ros and Bon Iver (hence, Robin's love) with pieces of Elbow, Radiohead, Jeff Buckley, Neutral Milk Hotel and Arcade Fire in there also, this 23 year old creator of an orchestra in his basement is a wonder to behold. Dealing directly with death, grief and pain, this is a surprisingly easy album to listen to. Ignore the lyrics and be transported another world, simple and dense. Listen closely to the lyrics and be torn apart, yet still transfixed on the beauty of the music created.
I have been listening to this album nonstop for a few days and find myself repeating it 3-4 times in a row before moving on. It is quiet, but heavy. It is worth your time and listening pleasure. Let me know what you think. Make sure you listen these songs.
and (warning: explicit lyrics you may not understand)

Listen to the whole album here.
The Antlers myspace.
So far Pitchfork has ignored them, which is not surprising. I am sure they will hate it.

Rick - Didn't have an email for you. But I have a friend who created a pretty cool site. When I got on it I immediately thought of you. Hope you enjoy and hope things are well in Tampa. We are in Alabama still.
www.politics4all.com