10+ Reasons to love The National 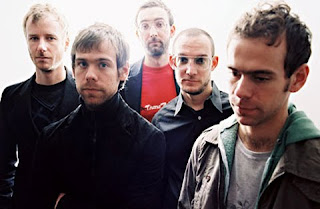 With their latest album coming out on Tuesday, here are 10 reasons you should listen to The National, the best American band out there presently.* Thoroughly modern, but deeply influenced by The Psychedelic Furs, Joy Division and Nick Cave, lead singer Matt Beringer's vocals are eerily deep/spooky and slightly reminiscent of the Crash Test Dummies or Leonard Cohen and his poetry is beautifully melancholy.
If you want to hear their album a day early and also read an in depth profile of what makes these guys tick (and make them so) good, read this New York Times article. It is spot on, especially concerning their extraordinary musicianship (I think their drummer is as good as any classic drummer).
This is just a taste, because any song on their masterworks Alligator or Boxer is as good as any other (in fact, Alligator is dang near perfect).
10. Abel from Alligator (as loud as they really get).
9. Mistaken For Strangers from Boxer. This is the song that most people that don't know The National really like. One of their many songs detailing the shallowness of hipster life and the desire for more connection.
8. Murder Me Rachel from Sad Songs For Dirty Lovers.
7. So Far Around the Bend from The Dark Was the Night compilation album with the line "praying for Pavement to get back together." You can watch them talk about it and play it live here. This is about as upbeat as they ever get.
6. Apartment Song from Boxer and Karen from Alligator.
5. About Today from the Cherry Tree EP.
4. Slipping Husband, the song every husband/father needs to hear at least once, from Sad Songs for Dirty Lovers. This is my favorite song. As an enneagram 4, I know he is speaking to someone like me.
3. All the Wine from from the Cherry Tree EP and the album Alligator, also featured on Nick & Nora's Infinite Playlist. This may be their best song, at least their most accessible with the great dismissal of California any East Coast snob would appreciate... because God is on my side.
2. Fake Empire from Boxer, a truly subversive tune used by Barack Obama for a campaign commercial and as walk-in music on the night of his election. The drumming is sublime and the lyrics are a pitch perfect dismissal of the emptiness of consumeristic lifestyles because "we're half awake in a fake empire." Watch it live on Letterman.
1. Bloodbuzz Ohio, the newest single from their latest album, High Violet which drops Tuesday. It is not their best single song, but gets you ready for how good this album will be. "I was carried to Ohio in a swarm of bees."
a special bonus. The National covering Pretty in Pink.
*I am cheating a bit by defining them as the best American band (USA). That way, I can get around trying to judge them against The New Pornographers and Arcade Fire (Canadian) or Radiohead and Frightened Rabbit (UK). The only real competition is The Hold Steady (The National is 1 while The Hold Steady is 1A).
Posted by DJ Word at 9.5.10

loved the nytimes' article's assertion about the perspective of high violet: the world according to a man who used to be the great white hope but now "he’s got a kid on his shoulder, lives on coffee and cut flowers while thinking about clearing out of the Silver City and going back to Ohio where life is simpler — until you get there and remember why you left."