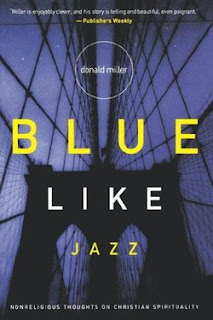 About a year an a half ago a dear friend , one of the producers of the Blue Like Jazz film project sent me the script to read and evaluate. He also wanted me to share my thoughts with the world. I did in May of 2009. Things were progressing well and my friend was raising funds for the film. Casting looked strong and their was good buzz. However, there were financial humps that could not be overcome, mostly due to the fact that those with the money (older, more conservative Christians) did not like the script and those that would like the script and film (younger, more open-minded Christians and spiritually minded persons) do not have deep pockets.

It was announced not too long ago that the project was dead. However some enterprising young me, probably wanting to be producers in their own rights have come up with an ingenious plan, obvious int eh world of Radiohead's pay-what-you-want, but still new to the film world. They have devised a plan for people to help save the film by giving money to the project and becoming, in effect, producers of a piece of art they want to see. As a former concert promoter that spent much of his own money on bands I wanted to see, I love the idea and want to support it.

So, here is my little way of helping. Please go to their site if you are a fan of the book and want to see it made into a film. If you are unsure, read my analysis of the script. The script has been changed since I evaluated it (and I have heard, some of the changes are reflective of my ideas- they were ideas by many readers, not just me).

So, here is the site to save the movie. Follow them on twitter. Give money for good art and spread the word.

Here is my reprinted analysis:

There is no other reason that a person of my stature with only a few hundred readers would get his hands on the screenplay that many are talking about. The only other thing I have read is from Gabe Lyons, and I am not Gabe Lyons. He produces big conferences and writes books. I write a blog and have better hair and music taste. Plus, I did not love the book. I merely liked the book, but I was not its main audience (too old and cynical).


To be Hollywood-y, I will tell you to think The Graduate meets Fight Club, without the sex, violence and multiple personalities. It is not your preacher's Christian film. In fact, it is light years away from and ahead of what normally passes for "Christian" entertainment (Fireproof, etc). The reason for this is a different agenda. Imagine getting a bunch of talented people together (that just happen to be Christians). Imagine that they have one goal and that goal is not to make a Christian film, or evangelize. Imagine that goal is simply to make a very good film that entertains, but the main character happens to have a Christian background which he is struggling with.
This friend wanted my honest assessment and I can tell you this… it is quite good. It is funny, edgy (but not too edgy- I wish it were more so, but I hate edge just to be edgy- see garden State), honest, brash and humble. Yes, the comparisons to Garden State, Good Will Hunting, All the Real Girls, Juno and Little Miss Sunshine, and any other coming of age story are warranted. It is a Christian Indie flick, and it works. It is reasonably Sundance-y and will be embraced by a similar audience, unless the audience is prejudiced.
They have started with the thing any film must have to be good... a very good script. Now it is up to the filmmakers to make the movie the screenplay deserves.
It is not as witty as Juno (which is not a bad thing- Juno may have been too witty), but is much more realistic than Garden State and its ending does not make you suspend any disbelief (unlike GS), which you have to do in Elizabethtown and any other hackneyed romantic dramedy masquerading as a personal growth flicks. No airport reunions here. Thank God. I start with the ending because it has broken many good movies in the past (you know, guy gets resolution to all his problems and the girl in the last 5 minutes).

Luckily, this ending gives you just what you need to be satisfied (and maybe shed a real tear) without resorting to the tricks of most Hollywood films. That is a credit to the filmmakers. In fact, the ending of this film is its strength. It is nice to see such a strong pay off and I hope the filmmakers keep it. Test audiences be damned if they don’t like it! Plus, the redemptive spirit of the final act is powerful and I connected with it because of similar experiences in college, mostly due to the grace of friends after I was broken by my own stupidity. I connected with that and the writer's disdain for Christianeze like "Bro" which I also despise.
Don't get me wrong, the screenplay is not perfect. There are a few flourishes I appreciate, but am skeptical of seeing done on screen. However, seldom have I seen a screenplay (or film for that matter) which does make me say, "I may have done that differently," or "is that really the best option?"

That said, Blue Like Jazz will be a Rorschach test for its viewers, with each of their own prejudices brought to bear. It mines Christian and secular Left stereotypes (both of which I find in myself), finding something in each to laugh at, but moves beyond these to find the humanity in "the other" each audience member has dismissed in the past. This happens if that audience member chooses to let go and become enraptured by this painfully funny tale based upon Don Miller’s own life, but fictionalized. It is not for the closed minded, no matter what their stripe, but neither was the book. The first scenes will find audiences not embracing the “Christian” label squirming because of the insider church language. However, the setup is needed and without this the pathos of the central character would be unexplained and the growth would be non-existent. And trust me, Christians will find plenty to make them squirm after the insider beginning.

My only concern for the film project is that an audience will be hard to find. Too many conservative Christians will find the reality, the honesty and the rawness disconcerting, realizing they are more comfortable laughing at those they disagree with instead of embracing them as friends and truth-tellers, while some of the more reasonable and progressive critics will come with their own agendas, looking for an evil proselytizer under the director’s slate board, not realizing that every protagonist in a coming of age film has a “born again” or epiphany moment, whether it is Zach Braff discontinuing the use of psychotropic drugs in Garden State or Seth Rogan realizing that he must find gainful employment in Knocked Up. It is basic to the plot of such a film. Just because Jesus is in the midst, does not change the basic arch of a story. I hope the “open minded” see that, unlike the writers of Pitchfork which dismiss most albums by religious musicians (see reviews of Cold War Kids and Manchester Orchestra). Of course, Miller’s books have found a large audience, so I think it has a very good chance.

I am very impressed and cannot wait for the soundtrack, if they get the rights. Hopefully it will be filled with Coltrane, Monk, Modest Mouse, Sufjan Stevens, Arcade Fire, Ani DiFranco, Cold War Kids, Welcome Wagon and other Indie Rockers from Asthmatic Kitty and Kill Rock Stars.
So, spread the word. Get the buzz started. This movie has the potential to make you proud. It has the potential to be the film most of us have been waiting for, an entertaining and truthful story with Christian and redemptive themes that makes us laugh and we can show our friends without embarrassment. It is about time.
btw, the filmmakers are looking for funding right now. If you are interested, or know others interested in investing in such a project with a very good business plan, let me know. I will put you in touch with the right people (and I have nothing to personally gain from any of this, beyond a movie I can proudly own- and maybe they will send me a nice t-shirt).