Congratulation Stealers on their accomplishment 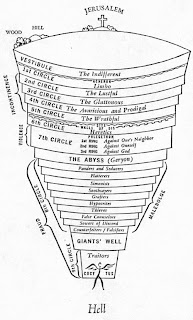 I would like to Congratulate the Stealers and their fans from _ _ittsburgh* on moving to the top/ bottom of another list, besides the one the referees and NFL have chosen to bestow upon the Rooney family (thanks to the officiating in SB XL and XLIII).
They have entered Rick's Ninth Circle of Hell Teams moving fast up (or down) the chart to an afore-unmentioned super secret 10th Circle. For a number of years they had lived in relative obscurity in Purgatorio or Limbo (Circle 1), only moving to 8 when the officials helped them beat the Seahawks in XL (circle 8 is reserved for those engaging in treachery and conscious fraud).
They are now in the 9th Circle of Hell, moving towards its center where the Cowboys and Florida Gators reside. They have joined the Miami Hurricanes, New York Yankees and Chicago Cubs and Dawyne Schintzius. They have moved deeper into the abyss than the Lakers, Houston Astros, New York Mets and LeBron James reside.
* I will no longer call that team from that city what others call them. From now on, it is the Stealers and they are from a city that I have chosen to designate in a manner that realistically depicts its circumstances. The P has been changed to 2 letters a bit more colorful and descriptive of the city.
If this sounds like bitterness... It is. Nothing fuels rivalries and sports like bitterness.
Posted by DJ Word at 2.2.09

i am SO slow on the letter changing game. i kept trying to turn it into a version of the F word...

hopefully this venting was cathartic and now we can move on. :)

i'm really sorry for you that they lost, because i know how much you love them.

I just read this. It was very amusing! Can I make a request that the Duke Blue Devils get a spot in at least the 9th level? Also, let's put Santonio Holmes a level or two lower than the rest of the Steelers, but not as low as Neil O'Donnell (AKA the only Steeler to ever cry).

Changing the P to Sh - not all that clever. The Penn State fans have been doing that for decades. Besides have you been there? Kind of redundant.

Anyway, give the Duke thing some thought.