The 3rd most famous Elvis releases an album today 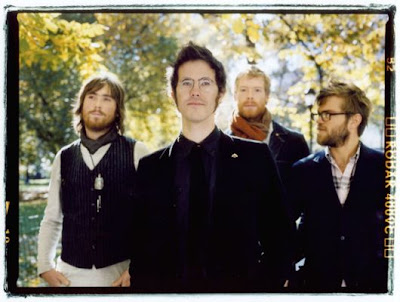 The sophomore album is out today by an artist with famous names that too few noticed upon the release of his debut 2 years ago. Elvis Perkin's debut album, Ash Wednesday, made my Top 10 in 2007 and his latest Elvis Perkins in Dearland drops today. I have downloaded it and will spend the time required to fully appreciate an artist of his talent. Besides the single Shampoo, I have spent precious little time with the album, aside from listening on myspace. From that and a few reviews I have seen, it is a bit different (a little more "band" oriented than the contemporary folk of his first album). Highlights of his first album include, While You Were Sleeping, All the Night Without Love, and Ash Wednesday (these are all youtube versions which will give you a feel). I love that Perkins does not want to be dismissed as a folk singer or singer songwriter, seeing himself as a recording artist. He says he "loathes the term singer-songwriter because it reminds me of open-mic nights and coffee shops and lazy chord structures." He is an accomplished musician with complex song structures which push him out of the folk festival crowd.
Elvis Perkins is the kind of guy that would get press just for his back story. The son of Psycho star Anthony Perkins and a famous fashion photographer, he attended Brown, focusing on poetry, before venturing out on his own to pursue music. His plans took a detour on Sept. 11, 2001 when his mother died aboard American Flight 11. It was 1 day less than the 9 year anniversary of his father's death from AIDS.
Out of such tragedy comes a work of stunning poetic art. NPR called him brooding, thoughtful and sophisticated with tunes that were catchy and timeless. He has been compared to Leonard Cohen, The Band, Neutral Milk Hotel and Bob Dylan with an expressive voice in the middle ground between a Jeff Buckley and Bob Dylan. Like Dylan and Bono he believes in a specific rhyme pattern in which the listener is forced to focus upon the couplets he creates. Some like this style, while others do not (I do).
The album and song Ash Wednesday come from Sept 12, 2001, when he realized he had nothing left of his moth but ashes, this on the anniversary of the death of his father, who was cremated. Months later, on Ash Wednesday, 2002 this become apparent and thus the song/ album was born.
Calling his lyrics stunning is an understatement. Seldom have I heard an artist that can turn a phrase as he can (Bill Malonnee, Don Chaffer, Bob Dylan, Will Sheff). Here is a sampling, which will not do it justice unless you hear the songs. Among the most devastating is this from While You Were Sleeping, a song about death and dreams in light of his parents' death:
so i waited for the riddled sky
to be solved again by sunrise
and I've made a death suit for life
for my father's ill widowed wife
So, listen to and pick up his excellent first album and consider his latest. If you want to wait, I am sure it will eventually go on sale, but don't forget about him.
Here is Perkins myspace page with streaming music.
Here is his latest project on myspace.
Buy his latest and download a copy of Shampoo, the first single for free.
Posted by DJ Word at 10.3.09

Thanks for the post! I downloaded some of his music and am digging it.