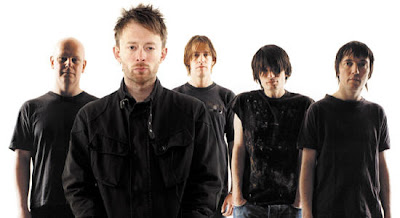 OK. After a little immature humor, back to the real list....
Radiohead is not the official band of Emergent, which may surprise some readers. No, like U2, they are too big for such a designation. While many Christians that consider themselves emerging love and identify with Radiohead, I think that is because those Christians identify with something bigger than that, The Great Emergence in Phyllis Tickle's vernacular. In fact, Radiohead could be considered the official band of the Great Emergence (social movement, especially the European/ Anglo version). However, I also designate them the official band of postmodernity and deconstruction (as in Derrida). This encompasses the spiritual and non-spiritual elements within this social movement (they have been designated the official bad of the Prozac Nation).
Radiohead's musical history is a fascinating example of postmodern deconstruction, emergence and reconstruction of a new mythos. In fact, I would challenge those that consider themselves emerging or emerged from traditional Evangelical, fundamentalist or mainline Christianity to think of themselves and their faith as I talk about the band.
It reminds me of the words of a philosophy of religion professor I had in grad school. Dr. Keith Putt told us at the beginning of our first session that his goal was to dump out all of our Lincoln logs which had been carefully arranged by our parents and churches. The dumping would be difficult, but eventually we could rebuild something better. This is Radiohead's approach to popular music and culture.
Radiohead began as a bunch of smart British kids doing post-Nirvana British Rock with elements of grunge and pop. While Pablo Honey was fairly mainstream, its lead single Creep had an edge. It was somewhat otherworldly and dealt with the singer's place in this world he did not understand. Of course, that intriguing song and album did not prepare anyone for The Bends, a masterpiece of pop perfection punctuated by deconstructive elements, especially lyrically. It was the warning shot that Radiohead had a different idea of what pop music is. While stunningly beautiful (it is the Buddha at which Coldplay, Keane, Snow Patrol, The Fray and countless other bands genuflect and try to recreate), the lyrics told a different story, one in which humanity is being lost in the midst of rampant, hyper-modernity, consumerism and technology (it, along with Adbusters opened me to this reality long before any Christian spoke of it). Fake Plastic Trees, the highlight of the album and the best song of the 90s, is a simple pop song, unlike any pop song ever written or sung and, along with My Iron Lung, a harbinger of what comes next, OK Computer, the seminal album of the decade.
Lyrically and musically, OK Computer is a deconstruction of everything modern culture and popular music stand for, while still maintaining the basic structure. It is a world in which religion has been rendered dead and people no longer control their own fates. It is not darkness on the edge of town. The darkness has wrapped itself around city hall and main street. There is little hope, even in the beautiful things. In this album Radiohead decides they have a new vision for pop music, but they have more deconstruction to do before they know what it is or reveal it.
This leads to complete deconstruction of the popular song structure, while still maintaining singability and melody on the albums Kid A and Amnesiac. These albums remind me of Miles Davis' most radical work channeled through guitars, machines and distortion. Gone are things like the verse-chorus, refrain, bridge (some songs are one long bridge to nowhere) and traditional chord progressions. Pop music has been broken for a long time, like modern culture, and Radiohead has chosen to take an axe to it, so it can be saved.
The salvation and creation of a new form of popular music comes on the criminally underrated and massively misunderstood Hail to the Thief, in which structure and chord progression is reintroduced and hope is reengaged for humanity and culture, but only in glimpses.
This us brings us to reconstruction and the hope of emergence, manifested in the engaging, fun, positive, hopeful and just short of perfect In Rainbows. With In Rainbows, Radiohead has not only recreated itself with its eyes on the long gone past of The Bends (Rainbows is a pretty album with pop songs), the deconstruction of the late 90s/ early 2000s and a totally new sound encompassing all of this along with a vision of tomorrow that can be a blueprint for Christians as they break down the spirituality, ecclesiology, theology and politics that hampered their lives, only to reemerge on the other side ready for growth in a new world that lives in the tension of their past and future.
Not only that, but Radiohead has broken with the traditional form of capitalism and trading of goods and services that it railed against on early albums by creating a new model of commerce between artist and audience, something the Emerging Church must learn from and model. It is one thing to deconstruct and complain, it is quite another to rebuilt as Radiohead has.
Radiohead is not the band of Emergent. It is the band of Emergence.
Posted by DJ Word at 2.4.09

Great post Rick. Not much to say other then AMEN!

i just wanted to say that i actually read this entire entry. :) and it's great. and i wish i could go to a church where radiohead led the singing/music part of worship. i can really feel jesus in their music for sure, whether they intended that or not.