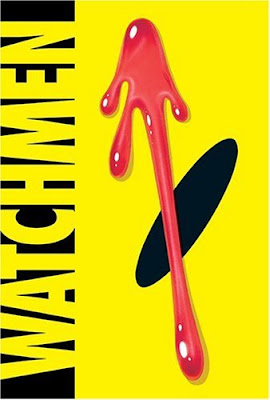 I am venturing out tonight to see Watchmen on IMAX at 10PM tonight, a little past my bedtime considering the flick is close to 3 hours (I think anything shorter would be a problem, in fact I think it should be a miniseries on TV). My anticipation is palpable, a mix of dread and excitement. I know I will be disappointed and I know I must see this flick. I have been waiting for someone to film this unfilmable movie for over 20 years and I am a little wary of the director. Snyder's interpretation of 300 was impressive, but that book narratively simple and primarily visual. It was not layered with subtext and considered one of the great works of literature of the 20th Century. This expectation caused the visionary Terry Gilliam to give up on adapting it, as it did the equally impressive Paul Greengrass. I don't yet think Zack Snyder is in their league, but I could be wrong.
As an 18 year old Freshman in college I stumbled into a comic book store like a recovering addict in the wrong part of town hoping for a quick score before getting on with his life. Yes, I just compared comics to drugs. See, I never had trouble with any of the normal addictive substances, not in my gene pool I guess. However, comic books are different. I have been addicted and quit cold turkey numerous times. As a teen my addiction was $50 per month (with $100 per month binges periodically). I stopped when I realized I was too involved emotionally in the fantasies I was reading about.
In college, partly due to Watchmen my addiction reached a consistent $75-$100 per month level until I realized how much I was spending and how much I did not like the guys at the comic book stores. You know that stereotype in the Simpsons? True. 100%. I did not want to become that guy, so I stopped cold turkey again.
In grad school, I was like a social drinker with periodic binges, but I kept the addiction under control. As a working adult with the financial resources, I flirted with it again, but never let it get out of hand. After marriage, I have ventured into the stores periodically for special stuff like The Dark Knight Strikes Back or Red Rocket Seven but I stay away at all other times.
Last year, my mentor and pastor friend Geoff (over 50 and still into comics) took me to a comic book store to look for something. I could compare it to an alcoholic venturing into a bar and asking for club soda, but pointing out the the other patrons the glories of single malt scotch. I told Geoff that he was potentially making me stumble, but I made it out clean.
Now I feed that addiction with the local library. I check out every graphic novelization I can find, read it in a few hours and return it. I guess it is like a recovering heroin addict repeatedly watching Trainspotting, but never spending money on blow.
I probably should stay away from the film adaptations, but that would be impossible. I must see how they pull this thing off tonight, even if it is a glorious disaster. So, back to that moment in the comic book store as an 18 year old recovering addict. Watchmen was the good stuff I had always looked for as a teen. It satisfied my longing and helped me realize the potential of this art form. Every few years, I pull the trade paperback out of its wrapper to re-read it (I dare not remove the original 12 part series from their wrappers- unlike fine wine they do not get better with age and should not be consumed). It still holds up.
Tonight I will get a fix, but I will return home and stay out of those dens of iniquity filled with guys I do not want to become (I like my hair short, living in my own house, talking about other stuff and being thin)... the comic book store. 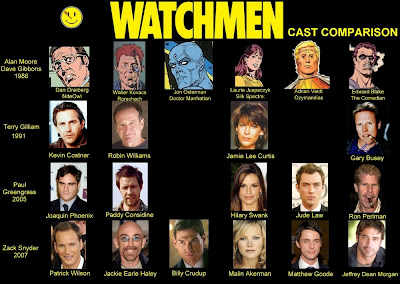 It was the shit