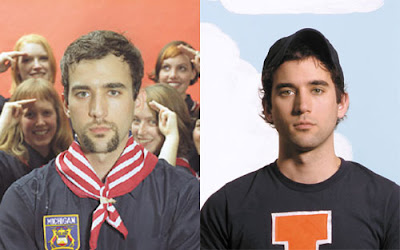 have you figured out #1 yet?
I am sure some of you were gunning for Mr. Stevens, a strong contender for the crown of Official band of Emergent. However, to be truly Emergent, one has to be a bit of a contrarian and pick something not explicitly Christian, so down goes Sufjan. Sufjan is Emergent's Official Singer Songwriter, barely beating out Bill Mallonee for the crown. He could also be considered the official band of Hip Christianity, if there were such a thing (contrary to some, I don't believe there is). He is definitely the cool Christian musician you pull out of your arsenal to prove that Christians make relevant music and that Christian music can be critically acclaimed (plus your mom will like him and he is actually harmless, just like Emergent). Steven could be the postmodern Bono, if Bono played banjo.
Sufjan is definitely not the official musician of the New Calvinist group fronted by Mark Driscoll. Stevens' music is too precious, sweet and in touch with the feminine. In fact, he could be considered chickified to Driscoll, so Neo Reformed guys should not listen to Sufjan Stevens, lest they lose their Man Card issued by Rev. Driscoll (of course, a few hours of UFC can atone for any Stevens' listening I am told).
Why would Sufjan, who is less established, beat Bill Mallonee? Because he is less established. While Bill hearkens back to what is best about the last 15 years theologically and musically, Stevens is a harbinger of the future of music, especially white music. He is collaborative in his art (a hallmark of Emergent Christianity). He has been more influential on Christians and culture in general in much less time, changing many of the rules for others musically. He stands lyrically on the shoulders of a Rich Mullins and Mallonee, but he is more musically adventurous, using ideas (many borrowed from traditional folk and jazz, as well as the romantic era) that are proving themselves to be emerging, judging from his influence on peers and followers.
Incidentally, I am not as enamoured with Sufjan Stevens as the rest of the Christian and Indie Rock community (especially were those meet and Stevens is deified). In fact, I think his music, while original and adventurous, is a bit of a One-Trick Pony (I must admit that one trick is quite impressive). He tends to rely on a specific vocal style and orchestration, whether acoustic (always banjo) or symphonic. As I prepped for this posting, I listened for hours and found myself bored at times, much more so than I felt while listening to VOL, U2 or Beck. I am very interested in his next project, to see if he has progressed and moved into a new direction (or taken things farther).
If not, it could be like an Emerging Christian or church that began very adventurous and got stuck in a rut (see Driscoll) once comfortable.
Sufjan Stevens is high on the list due to this adventurous spirit, original musical vision and his propensity to retell familiar narratives of the past in a new way, finding the new angle, fresh metaphor or fresh perspective (through instrumentation and lyrics). He avoids cliche like it is the plaque (to be ironic) and demands of himself a new angle, when an old word is expected. He tends to find Jesus and spirituality in the mundane or familiar story, whether it is Superman as Jesus, Young Love morphing to cancer treatments and prayer groups or ancient Christmas carols and hymns. He is a parable speaker (Peter Rollins as songwriter?). He is rooted in the American story, taking the myths and reassigning them new meaning. This is an impressive feat, probably born out of his MFA in creative writing more than anything else.
Plus, he lives in Brooklyn, which has to mean something.
Posted by DJ Word at 8.4.09

Dang it! I had sufjan going all the way in this thing.

Oh well, I still did better here than in my NCAA bracket.

This has been a fun series to read.
Thanks.