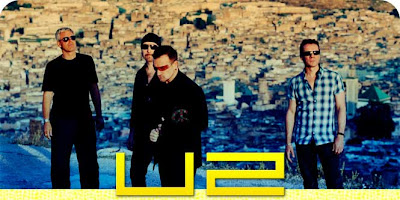 It may come as a surprise to many, but U2 is not the official band of Emergent. Sorry guys. U2 is much to big for you/ me. U2 is the official band of World Christianity (non-fundamentalist edition) and Bono likes it that way. While U2 stands for much, if not all, that Emergent is, it stands for so much more. Saddlebackers, Willow Creekans, the New Reformed, Social Justice Methodists and Anglicans, Vatican II Catholics and Unitarians can all claim U2 to be their band. Bono in own little Messianic way has made it so.
As any casual reader of this blog can attest to, U2 is my all time, most special, life long love, bestest band ever. If there is superlative, it can be said of them, by me. I have seen them in the 80s, in the 90s and in the new millennium. Each time blew my mind, whether communing with God like I have few times while singing 40 with 50,000 others in old Tampa Stadium in 1988 or watching the Irish flags wave around the new Boston Garden in Boston while my wife wept (she was pregnant, so I am sure that had something to do with it), U2 has given me great moments.
While I think The Beatles are superior to U2, since they created the entire template other musicians are fighting over, I would rather listen to U2 on a daily basis. Plus. they are part of my life and spiritual journey more than any other band (though VOL and The 77s are close). I must admit that I think Radiohead makes more cohesive, more adventurous music and I have spent more time with them the past 15 years than U2, but U2 speaks my language, and that of many Christians with open minds.
I have never been interested in the radically stupid and unproductive debates over Bono's relationship with Christ and the church. Like everyone, I have my opinions. What I can tell you is that my life as a follower of Christ has been completely altered and helped by the songs of Bono and company. Not only that, but as a teenager my eyes were opened to the issues of social justice by Bono and Bob Geldof, secular saints in my eyes. I cannot separate my spirituality from social justice, doubt and humility, all gifts given to me by Bono more than any pastor I have ever listened to.
While others like to look at every statement of a person in their pursuit of heresy and purity, hoping to find an opt out, whether it is Brian McLaren, Mother Teresa, Barack Obama, George W Bush, John Piper or Tony Jones, I look at a few other things. Does this person help me follow Jesus? Am I better as a Christian and as a person because of this person's teaching or presence in my life? Does this person's public spirituality have the fruit expressed in Galatians 5? Is this person bringing life or death, freedom or bondage to the spiritual life of others? If the answers are positive, I am grateful to that person and will defend them and their impact upon my life and that of others.
Bono is such a man. The history of U2 has been written. The reviews of the albums are in. I have listed and gabbed about these guys for 25 years. Heck, I have written a book which will never be published based upon their music (so has everyone, I guess). We all have our opinions. Bono is great. Bono is a pompous ass. Bono is a megalomaniac. Bono is a philosopher. Bono is a saint. Bono is a sinner. U2 is bombastic. U2 is sublime. U2 is a bunch of sellouts and U2 is the greatest band to ever walk this earth. I think Abraham Lincoln and Charles Darwin are the only persons in history besides Christ himself with more ink devoted to their every thought and action. 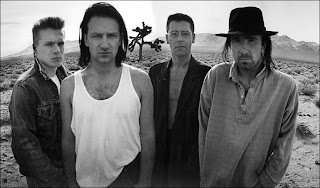 But, U2, their music, their words and their actions have impacted the Emerging Church greatly. We know that, so I won't detail every little nuance of how our preaching, views of justice, worship songs, dress and theology have been impacted by a serious theologian and preacher, Paul Hewson and his band of brothers. The proof is in the pudding, for good or bad. The Macathurites and Piperites can use Bono and U2 against the Emerging Church. I will brand that logo with honor.
I am just thankful that someone else still has not found what he is looking for.
Posted by DJ Word at 1.4.09

if I thought about April Fools Day I would have totally done something like name Bon Jovi #5 and see if it got some laughs.

I know you were rooting for U2 but they are just too big for us.

Official band of the Shape of Things to Come?

David- very well said. this is why you are a professional writer and I am not. I am embarrassed when writers stop by and see my sloppy usage of the English language.