Jesus Died for Your License Plate 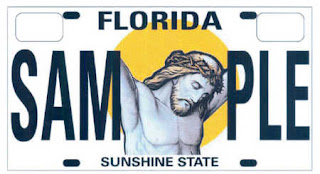 Floridians have more license plate options than you can imagine. We have licenses with panthers, dogs and cats, clown fish, manatee, bass, spoonbills and cave divers. They include licenses to support breast cancer research, pro-life causes, tennis, organ donation and home ownership. You name a sports team in our state and you can have a license to support that team. To see a list, click here. But, we don't have anything that says, I am a Christian, beyond fish symbols, bumper stickers and rosaries from the rear view mirror. Many Christians have noticed that it is unfair to be excluded from trumpeting faith from the back of an SUV, because nothing says "I love Jesus" like a license place while cutting people off in traffic.
While I will only say this is about as useless as an expression of faith could be, even moreso than T-shirts, pens and mudflaps, St Pete Times' columnist shares his insight in What Would Jesus Say About His License Plate, noting that not only does it potentially break the 2nd Commandment, but it is quite tacky. Did Jesus die so we could depict "the Son of God, the Lamb, the Savior …On an official state of Florida automobile tag. An auto tag?" according to Troxler (thank the Lord for "Secular" journalism).
other Money quotes:

Jesus is to be mass-produced, imprinted on metal, given a reflective coat and sold for money. His crown of thorns will lie just beneath the "FLORIDA" across the top of the plate; his outstretched arms will be truncated to the left and right by the tag numbers, so that one does not actually see the cross, the nails, the wounds — no, we would not have that! The words "SUNSHINE STATE" will be stamped across his unscathed, unlashed torso.
Instead, my first thoughts were more about the stories of Christ in the Bible, angrily throwing the money changers out of the temple, and instructing his followers to pray privately in their closets rather than displaying prideful piety on the public streets like the "hypocrites" (which is exactly what he said. Look it up.).

just in case you are offended by an image of Christ on the back of your automobile, here is a quite class and snazzy opther option, all of which still await votes from a Florida legislature with nothing better to do with their time.

I always wonder if these things imply a stance that must be defended. Even the "classic" fish gets into a kind of bumper war with the Darwin, then it eats the Darwin fish, and who knows what's next- arm wrestling at stoplights, or worse?