Best of 2009 so far, Elvis Perkins in Dearland 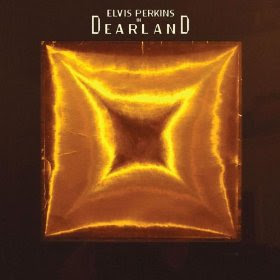 In case you had no idea, I am a huge fan of Elvis Perkins, named by his father, Anthony Perkins, star of Psycho, for Elvis Aaron Presley. Perkins, whose first album was an extraordinary but singular sounding effort, is no longer a solo artist. Instead, in the tradition of Bruce Springsteen and Ben Harper he has taken to recording and touring with a full band. I liked him as a primarily acoustic artist because even as a solo-folky, there was something different about Perkins that separated him from your typical singer songwriter. It could have been his poetic lyrics (he is gifted at the pithy couplet). An example from his first album, Ash Wednesday is "and I've made a death suit for life, for my father's ill widowed wife " from the song While You Were Sleeping. But this album is as good, maybe better than album #1, just very different.
Whereas Ash Wednesday was an album of mournful songs about the losses of his parents, this album is a raucous party (albeit primarily acoustic), still dealing with the death of his mom (Sept. 11), but with an eye towards heaven or whatever he believes in. Morose, maudlin or in need of mild anti-depressives could be descriptors for Ash Wednesday and none of these apply to Dearland. It is dark, but positive, like a good Tim Burton flick.
Judging from the lyrics, it is still Perkins' vision, even though a band is involved. Highlights include 123 Goodbye with the devastating line "I love you more in death than I ever could in life" and Doomsday, the singer songwriter's 1999 with this ditty "And even though you voted that awful man, I'll never refuse your hand on any given doomsday," along with the first single Shampoo.
For the life of my, I cannot understand why Perkins is not huge. Buy this album and his last and judge for yourself.
listen here.

and the New Orleans dance party about the end of the world...
Posted by DJ Word at 30.6.09