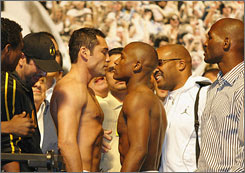 1. What will I be doing tonight? Your friendly neighborhood pacifist/ boxing enthusiast will be standing in front of a television set watching Oscar de La Hoya and Floyd Mayweather, Jr. beat the ever-lovin' snot out of each other at 11PM.
I am expecting a Mayweather victory (probably late round TKO or decision) but hoping for a De La Hoya victory by KO.

2. Kristi and I played hooky yesterday morning and attended a 9:45 AM showing of Spidy 3. Needless to say, it was fun. I don't think films like this are worthy of detailed reviews (unless you a payed for it), but it was a good flick. While it did not hit the epic heig

hts of Spiderman 2 (one of the best comic book or popcorn movies ever), it was a worthy finale, not an epic failure (and franchise destroyer) like X-Men 3 or the final Matrix.

As a movie snob and a recovering comic geek, I have many thoughts, but I am not in the mood to share more at this moment.

My favorite detail of the film is what turns the director into one of the coolest dads in the world. His children have very small speaking parts in the movie. Most parents cannot compete with this. If you have not seen it, look for his boy and girl towards the end.

3. Finally, I want to thank anyone that has encouraged us during this time of no work. Thanks for the kind words and the ideas. I have some interesting possibilities on the horizon I hope to share in the near future. I covet your prayers, because one of the possibilities is a dream job for me. I can give you more details if you choose to email me.

Rick,
I have obviously been out of the loop on most of your situation. Email me with your phone number. Just want to get caught up.
Miss you,
er