"Churches should replace hymns with Arcade Fire songs,
more kids would sing along."* 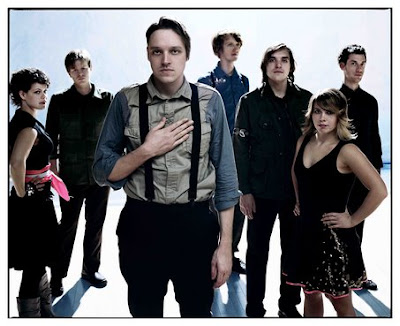 How many of you guessed this? Ohhh Canada! I had to pick a band that did not hail from these United States and included both genders in its leadership, one that explores the past and future; mining many traditional sounds and world elements, yet is still totally part of its own culture, a band that is obsessed with religion, consumerism, community, activism, etc. It sounds like Emergent, especially its younger future. It also helps Arcade Fire's cause that it is the premiere band to debut since the emerging church conversation's advent in its present form. Plus, I like picking a band that is not even "Christian" which should satisfy Emergent's critics ("I told you they were not really Christians. If they were, their official band would be Caedmon's Call").
Of course, I am basing this on just 2 albums, one of which is really the official album of Emergent more than any band could take the title official band of Emergent. However, based upon this album and what I think we are in over the next decade, I designate Arcade Fire the official band of Emergent.
Just as Emergent has had its Lesslie Newbiggin, Brian McLaren, N.T. Wright and Stanley Grenz and is moving to new voices, Arcade Fire is the next step in spiritual music's evolution, beyond Radiohead, U2 and VOL.
Its first EP made little splash, so many critics and listeners were not prepared for Arcade Fire's debut, Funeral (it reminds me of the early 80s when R.E.M.'s Chronic Town EP which no one heard was followed by Murmer, which blew my bedroom door off its hinges). A bunch of intellectual Canadians working as a community, led by a husband from Houston and his French Canadian wife, astonished listeners by conjuring up the spirits of the Talking Heads and Modest Mouse, while turning those bands on their heads through traditional instrumentation and
choir-like choruses. Funeral sounds like wheels coming off of a Gospel bus, chaotic but ordered, like the beginning of the universe or the warning shots of a band to be reckoned with for a long while.
It is an album that deals directly with the reality of death, but laughs heartily and hopefully in its face, daring it to direct confrontation. Its lens is the "neighborhood" handed to us by our parents. It is to be destroyed, but not angrily. It is to be confronted and destroyed to build a new world, one focused on faith, hope, love and community (a theme expanded upon on album #2). Does this sound familiar?
While not as spiritually direct as its follow up, Arcade Fire speaks to us by creating otherworldly music and new hymns it will perfect on Neon Bible. They reach a transcendence on this album that contemporary praise and worship cannot, beyond the emotional heart pull of your typical never ending crescendo of praise choruses. Listen once to Wake Up and tell me you do not wish church music reached those heights, everyone singing in unison. It is an album of renewal. 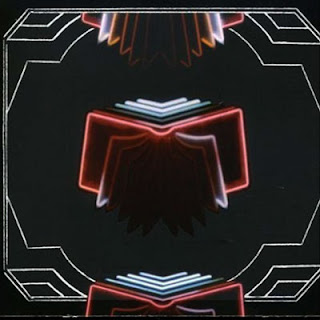 But it does not prepare us for the intense spirituality of the next album; the main reason I consider Arcade Fire the official band of Emergent, or emerging Christianity. That album is entitled Neon Bible and I hope you own it. Named after John Kennedy Toole's first novel and sporting a sound church worship bands should study like a sacred text, Neon Bible declares what we considered a possibility with Funeral; this could be the new U2 or Bruce Springsteen (its musical poppa, along with Talking heads).
To call Neon Bible a dark album is to miss the point. Yes it is dark. Yes it is angry. Yes, it is intense and almost devoid of humor. However, like the film Magnolia, it builds the relentless despair to prepare the listener for the hope of the final quarter. In fact, the last 1/3 of the album is on par with the best album ending of all time (Abbey Road's final act). Built on a wholly emergent understanding of community, Arcade Fire shoot broadsides at the church, religion, America, consumerism, war and Western Culture in general. However, as Winn Butler said in an interview, He "is addressing religion in a way that only someone who actually cares about it can. It’s really harsh at times, but from the perspective of someone who thinks it has value.”
The ultimate goal of this album, stated in the same interview is to move beyond the fear which has caused so many of the problems our culture has. Winn states, “There are two kinds of fear: The Bible talks a lot about fear of God—fear in the face of something awesome. That kind of fear is the type of fear that makes someone want to change. But a fear of other people makes you want to stay the same, to protect what you have. It’s a stagnant fear; and it’s paralyzing." It is that fear that the emerging church is fighting, and these anthems should become part of its hymnody, a hymnody that stands against (according to Butler) "this idea that Christianity and consumerism are completely compatible, which I think is the great insanity of our times.”
The Christian themes of this album have been explored by those more talented than I, namely David Dark. However, I can tell you that no specifically Christian album has spoken to me like Neon Bible in many years. In fact, I put it with The Joshua Tree, The 77s, Killing Floor, Circle Slide and The Turning as the most spiritually significant albums of my lifetime.
From the Black Mirror of the opening track which illuminates the future, to the golden calf American Christianity has created in Neon Bible, the prophetic cry of Black Wave/ Bad Vibrations and the realization of the damage the church can do to those which love it in the grandiose hymn Intervention ('working for the church while your family dies"), the first half of the album pulls no punches in its indictment and I feel its weight. However, it does not prepare me for the power of Butler and company's descent into the heart of an American Christian (Jessica' Simpson's dad standing in for each of us) in struggling to do the right thing, while trying to live the American dream and failing miserably in the song (antichrist television blues). The final lyric of the song, "Oh Lord, am I the Antichrist" never leaves me without a chill down my spine.
And the album has not even approached its crescendo. Windowsill is probably the most preachy song on an album of sermons, but very few Christians have dealt with the subject of American power, Empire and consumerism in such a compelling manner. This song has become a personal anthem of mine, part of a ritual I do to focus myself when I become to enamoured with myself, my nation, or my lifestyle desires.
And then comes the hope. After showing us the condition of our hearts, our faith and our culture, Arcade Fire chooses to remind us that there is a hope beyond this world we know, one filled with community, connectivity and humanity at its best in No Cars Go. And of course, they end the album with a hymn (organ and all) dedicated to connection with each other and the world beyond in My Body is a Cage. Even though the singer lives in an age that calls darkness light, he cries to have his body and spirit set free.
Amen. Neon Bible is a litugry for these troubled times, a church service we need to go to this Good Friday and Easter, knowing from the darkness of Friday, hope arrives with resurrection Sunday.
An indictment of the American religious condition and Western culture that is only saved through personal responsibility for the needed changes based in community and hope for the future sounds like a Christian movement I want to be a part of. In fact, it sounds like a Christian movement I am part of. And that is why consider Arcade Fire the official band
of Emergent.
Arcade Fire's Neon Bible was my Top Album of 2007. Here is what I said about it then. link
* Michael Spadoni (Reax magazine)
Posted by DJ Word at 10.4.09

Thanks for the fun stuff Rick.

Great post, Rick. Those quotes from Winn are amazing, and are going to be provoking my thoughts for a good while.

I must say I didn't guess this one, but I'm right there with you. Arcade Fire certainly deserves the crown. Good pick. Great series! It's been a good read all the way though.

I look forward to checking out previous posts of this series but this was a fantastic post.

I remember the first time I heard the Arcade Fire, a senior in my high school youth group said it was the most amazing thing he'd heard. I too was moved by Funerals and was actually worried that their follow-up would not meet the high expectations they had set for themselves. But Neon Bible was brilliant and it sounded great live. I also like that they recorded it in a studio converted from a church.

I didn't realize David Dark wrote about them but I loved what he said about Radiohead in Everyday Apocalypse. I'll have to check that out too.

great job. I totally agree with you. And I've been wishing church music could sound more like AF or the Decemberists for awhile. Songs like "Headlights look like Diamond" from AF's EP was for me just about the perfect song. And if Chris Tomlin would only write a song that sounded like "Crane Wife 1 & 2" of the Decemberists, I would probably kiss him.

Just came across this series and loved it. Agree with all top ten entries having a place here. Would have considered a couple more.

Bruce Cockburn- amazing singer/songwriter from Canada. Social justice and God together on the menu. Amazing worldview.

The Call/Michael Been- Great band and the singer had the guts to appear in the movie The Last Temptation of Christ.

Thanks for your blog.