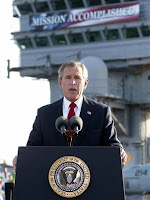 I would like to take this opportunity to celebrate out the 4th Anniversary of Mission Accomplished in the Iraq War on May 1. Not only is it the 83rd birthday of my father, a decorated veteran of 3 Wars, it is also the day that America declared victory in Iraq.

To think that I and many of my friends were sceptical about this war before it began and as it went on. We really thought America was doing the wrong thing and would get stuck into a situation that would take months to get out of, at the cost of hundreds of American lives and thousands of Iraqi lives. Again, my friends and I were wrong and can see that. We did not fully appreciate Bush's declaration of victory at the time.
So, Happy Anniversary to All
Posted by DJ Word at 1.5.07

In our faith community there is a rancher who fits the profile. He is a good man, who believes in republicanism, the right to bear arms and supports our troops. At every gathering he prays for the president and for the our troops.

A few days ago as our community was praying he prayed his "standard" prayer, but then he continued to pray asking God to bring about peace, to end the war and to change the mind of the president.

I stand against this war. I am saddened by the thousands of American soldiers and the tens of thousands of Iraqis that have died in this conflict. But I am heartened to see that God can use the stupidity of war to change our perspectives.

Hi Rick, you don't know me, but I enjoy your blog. I'm a lay leader in a Tampa Bay area church and I would like to talk to you about the emergent conversation, but I can't figure out to email you. Would you mind emailing me at daconfalone@msn.com?
Debbie, Port Richey, FL