Bono gets it right, for once 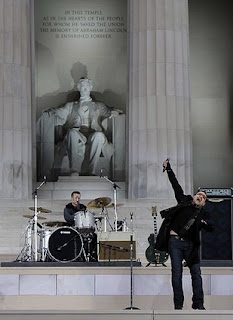 Anyone that I have ever discussed the U2 song Pride (In the Name of Love) with has heard me rant about Bono's mistaken reference to MLK's death. In the song he sings "early morning April 4, a shot rings out in the Memphis sky." For 20+ years this has bugged me because any American with a knowledge of history knows that MLK was assassinated in the early evening of April 4.
People have thought I was wrong because it is Bono... and he must be right. People have tried to justify the "artistic license" of getting the facts wrong, usually saying that it may sound better. To these I remind them of why MLK was on his balcony in the evening and other historic indicator of the day's events or I ask them to sing the lyric with "evening", instead of "morning." It sounds the same.
So, during the commercial breaks of the NFC Championship game yesterday I keep switching over to HBO to see who is singing for Obama. I catch U2 and note Bono singing the lyrics right. Of course, this is in front of Obama, who knows when MLK died, on the steps of the Lincoln Memorial where MLK gave his most famous speech and one day before Americans celebrate MLK day. He had to get it right, huh?
I have heard that, over the year's he periodically gets the lyrics right. However, I have seen U2 live 3 times in the years since and watched DVDs and television concerts yet never heard him get the lyrics right.
But, last night with the world listening and me paying close attention, Bono stepped up. Good job, Sir.
watch him get it right.
Posted by DJ Word at 19.1.09

"I have heard that, over the year's he periodically gets the lyrics right. However, I have seen U2 live 3 times in the years since and watched DVDs and television concerts yet never heard him get the lyrics right."

So perhaps a more appropriate title for the post would be "I finally saw Bono get it right."

I have heard a rumor, but I can do not know if is substantiated with hard data. So, in lieu of hard data I can only state that it is hearsay.

So, I stand my my statement that he finally gets it right, especially in public for an almost unforgivable mistake.

Man, you do love that guy, huh?

It's historically inaccurate, no doubt. But I've been working on this all day, and 'morning' sounds better than 'evening'. 'Morning' has the same round sound as 'April 4'.