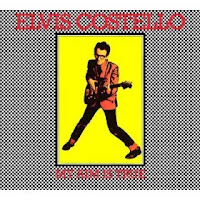 Elvis Costello's debut album My Aim is True is only $1.99 at Amazon's mp3  page. This release includes Alison, Watching the Detectives, Less than Zero and Red Shoes.
On his 1977 debut, the 23 year old self proclaimed Angry Young Man and Peter Parker's favorite musician proves himself to be more than just a "punk rock singer songwriter" with a stunning selection of songs filled with the devastating tenderness and sadness of Alison to the harbingers of 80s New Wave of Watching the Detectives and Less than Zero.
Posted by DJ Word at 9.1.09

"red shoes" -- made me smile this morning just remembering that song.

and now i got all kinds of elvis in my head.