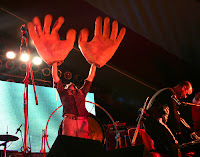 If I had not been so tired upon arriving home after the Flaming Lips show, I would have attempted to document the strange wonder that audiences experience when the lips are in town. However, this reviewer does a wonderful job capturing the essence of the show here.
If you have not seen the Flaming Lips in concert, make sure you do it at least once. The audacious mix of Electric Light Orchestra and Radiohead at a children's circus (directed by Wierd Al) must be experienced to be fully appreciated (and it is well worth the price).
In case you do not read the review I will say this...
confetti, giant yellow balloons, giant hands (like the film Science of Sleep), spinning flashlights,

streamer shooting guns, q beam toting Santa Clauses, go go dancing aliens, skeleton suits, roadies dressed as Super Heroes, green laser lights, taps playing electronic bugle (poignant moment), smoke machines (of course), gong, Japanese anime videos, Japanese television, fake doves, requests to hug each other, video camera in singers mic, smoke and flame shooting megaphones and scenes from Jon Stewart's ill-fated MTV show form the early 90s and 90210 on the screen (introducing them playing She Don't Use Jelly and Do You Realize?) .. oh, and great musicianship and song selection.*
*sadly there was no fake blood, giant hamster wheel or animal costumes at our show (I guess they have been played out)
** the posted pictures are linked to the originals on Flickr taken by Phil Bardi of Creative Loafing.
Posted by DJ Word at 17.4.07

Thanks for using my pics, and thanks for actually giving me credit!

It's nice to find someone doing things right...