there will be Oscars 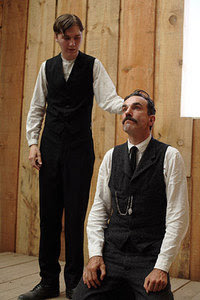 Upon seeing the list of Academy Award nominees, I was more pleased than I have been in quite a few years, while still terribly disappointed. I am glad to see Paul Thomas Anderson getting his due for the slow burning epic There Will Be Blood*, which Kristi and I saw on Saturday. However, there were 2 serious omissions from the list of nominations from the film.

As usual, the Academy ignores scores by original musicians that are not part of its clique (and abiding by their staid traditions). To not include one of most brilliant scores in recent memory, one that reinvents the film score, while still being somewhat traditional is a travesty. Johnny Greenwood (yes, Radiohead's guitarist) creates a soundscape that acts as a second lead character. Reminding me of both a horror film score and the classics of the 1960s, Greenwood's sharp and cacophonous strings created an unsettling dissonance integral to the film's center. The influence of Kronos Quartet along with Morricone is evident and appreciated.

Also, the lack of a nomination for Paul Dano as supporting actor was a serious misstep. While Daniel Day Lewis was typically terrific (he is always 1 step above the rest of the actors in any year he chooses to grace us with his presence), it is ridiculous to nominate him without his nemesis. The performances work in tandem. The tension in the church/salvation scene between Dano and Lewis is by far the best scene of the year in film and equal to watching Conners and McEnroe volley in the U.S. Open. That Dano does not get swallowed by the force that is Lewis is a feat unto itself.

Although the film is by no means perfect, Anderson attempts such great heights it must be applauded. Not since Coppola's heyday have I seen a director approach the film making of Orson Welles with such welcome abandon. While he is not yet on Kubrick or Altman's street as a director, he has turned the corner and is in the neighborhood, passing Malick and Bogdanovich along the way.

Best Song- "Falling Forward" from Once (there should have been more nominations from this film, but I was glad they acknowledged this wonderful song. I hope it wins).
Ellen Page from Juno
Cate Blanchett from I'm Not There
Sicko for Best Doc (MM's most important, accessible, truest and best doc)
Ratatouille's screenplay

Mistakes They Made (besides the obvious ones listed)

Once again Oscar ignores Tim Burton in the Best Director category (as well as Best Film). How can they continue to ignore his genius, especially in light of nominations for inferior musicals in recent years?
Where is Josh Brolin for his turn in No Country?
Where is Into the Wild? How can the give a nomination to Jones over Emile Hirsch?

I could go on, but I will stop.

* while on some level, the title is accurate and brilliant, it is a bit of a misnomer. Do not let the title dissuade you from seeing the movie. It is much less violent than Sweeney Todd (which should have had the title) and No Country for Old Men.
Posted by DJ Word at 22.1.08

even though i didn't really "enjoy" this movie, i completely agree with you that paul dano should have been nominated. he was brilliant.

couldn't agree more about the omission of greenwood.

i suppose, on the whole, i was struck less by who they DIDN'T nominate...than who/what they did.

for the record, i really liked juno. but don't think it deserves the best picture nod.

surf's up for best animated feature? surely, one of the 4 trillion other cgi movies that came out this year could have taken this spot. the academy needs to stop rewarding penguin movies...or unispired studios will continue to make them.

i will wait until i see michael clayton before i pass judgement on any of it's noms.

finally, norbit should never under ANY circumstance be nominated for anything other than this.

Well done man. I very much agree with you on There Will Be Blood. The baptismal scene is brought so much more into it's magnitude once the closing scene has been culminated.

Like Cade, and having scene the film separate from him, I agree that Juno wasn't necessarily a "best film" pick. A good film indeed, but not among the top 5 of the year.

while it may not be top 5, I was not sad about the inclusion of Juno. I felt it was superior to Garden State (not nominated) and Little Miss Sunshine (nominated). It seems every year or 2 the top "Indie" flick gets some press and nominations.

they then make themselves seem hip and ignore the movie except for the occasional nod in a supporting category or Screenplay.

At least Surf's Up is superior to Happy Feet. That movie was horrid! There were few good animated films this year. The only 2 good ones were nominated along with Surf's Up, which was mildly amusing and not painful to watch (which in these days is all I can ask for).

according to entertainment weekly, the omission of greenwood's score was due to the fact that the academy "disqualifies scores 'diluted by...pre-existing music.'" citing anderson's use of a previously released greenwood piece and a "number of existing classical pieces."

thought that was interesting.

..and 'happy feet' was terrible.