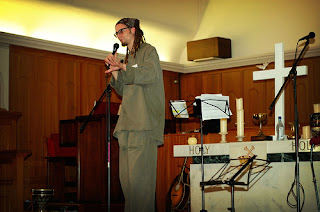 As the only member of the Sustainable Faith leadership team that is also an active blogger I have been assigned the task of reporting on the conference. Luckily Josh Brown has done a good job of providing pictures, reporting and controversy. See here for his recap. See here for his controversial statements on one of the speakers.

As one involved deeply in the planning and execution of the event, I am unable to provide an unbiased look at what happened. There are things I feel went very well, but I am too close. Similarly, there are things that I have negative impressions of, but that could be due to proximity.

So here is a rundown of the highlights. It is up to you to decide if you missed something special.
I may come back later for a more extensive evaluation, but probably not (I will note it if this happens). Stay tuned to this site and www.asustainablefaith.com for mp3s and podcasts of many of the talks (we may try to get a few on the EV podcast).
Posted by DJ Word at 6.2.08

I agree with your Tim Keel point...he is one articulate young man & wished I could have stayed for Shane's discussion. Was wondering where you weighed in on the Viola angle...very much enjoyed the burger (no avocados?)and movie / music talk with you and a few new kindred spirits...need to hang out more often, friend!

oooo, i forgot about how much the emcee sucked in my response. j/k.

i think shane is legit too. it's a shame it's easier to dismiss than think and act. and i think chris was the best part of the event. and danielle rocked it hard on the sabbath too.

and i think i've listened to tinarewin 20 times through. but i'm still not a fan of the new pornographers.

What a great day. Saturday was awesome. Would have loved for the panel to go longer and heard more from Chris. I was challenged to re-evaluate my own convictions or lack there of. Really look forward to the next one. Made some new friends whom which I hope to further communicate with and gather together again.
Jeromy