I was there... a bit of a correction in the short history of Emergent 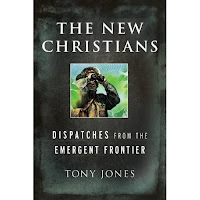 As I have read the eloquently written cursory history of Emergent by Tony Jones in The New Christians (still waiting for my own copy) and the funnier details/retractions given by Jason Mitchell (to think I wanted the job he was up for in 1999?), I must give my 2 cents to a couple of conversations, by telling you I was there and the details were a bit different from the reporting...

Why? Because I was an important factor in the beginnings of what is now Emergent? No, I was simply looking for friends from a group of people much smarter and more successful than me (although that was not yet known- I thought I was some great mind with future success in church planting and writing- don't ask me how that has been working out). On numerous occasions I was literally waiting for someone to give me a ride to an airport. So, now that it is officially history- I can say I was there, not even as a footnote though.

In 1998 I was the Associate Pastor/ Youth Minister at a large (for Virginia), moderate, traditional Baptist church in Richmond. I had been the Gen X guy for the region and became the Postmodern guy for the area. I thought I was out in left field until another minister showed me what was happening at Leadership Network with Doug Pagitt. I had ignored LN because I thought they were stuffed suits wanting to turn all churches into Willow Creek. However, I read Doug Pagitt's bio and something clicked.

We shared way-too-vulnerable emails and I was saved. I had found a kindred spirit. He invited me to a youth ministry meeting in California, where I met Tony Jones (he picked me up at the airport and we ate In-and-Out). Instead of a major meeting, 6 of us showed up, including 2 from YS. It was here that Tony brokered his book deal for Postmodern Youth Ministry, which I never read.

This was a great meeting. Doug was still spending money recklessly on food and spas and a nobody like me was the beneficiary. I had found a home. Not that I had anything to offer, but it was home nonetheless (aside from cheap jokes and expensive smokes). Plus, they were nice to me, even though I thought Creed kinda sucked (my music tastes have always been better than most of the Emergent Bishops). I was longing to get out of my present ministry position and Doug helped immensely, setting up interviews I was not qualified for and looking out for this SBC guy from Virginia.

In early April 1999, at Doug's bequest I attended a LN meeting in Spencerville, MD at the home church of Brian McLaren where I was hosted by the biggies of the day; people like Chris Seay, Mark Driscoll, Mark O, etc. Each was kind and was looking for another friend along the journey. I hit it off with Chris Seay, who (at the time) was the only other Southern Baptist deeply involved.

Over drinks late one night, Chris invited me to help him start a church in Houston. The rest, as they say, is history. That began my shaky history with Emergent, a conversation that has been painfully fruitful in many ways and led me out of the successful ministry arc I was on towards eventual poverty and obscurity.

BTW, at this meeting in MD, according to Jason Mitchell's blog, Mark Driscoll declared the conversation full of s_ _t. This is inaccurate. Because of my elaphantine memory I can declare this with absolute certainty. That quote is assuredly from Seattle later in 1999. I was in the room (Chris Seay had left me in Seattle with no place to sleep and no ride), waiting for a ride after the declaration and the "conversation" that followed between Doug Pagitt, Andrew Jones, Brad Cecil and Mark Driscoll (Cecil was my ride) in which this sentiment was discussed and dissected. While there had been ruptures, this was the proverbial straw. As a peon standing there I was terribly uncomfortable (but you can see which side I ended up on- even though Mark took me to opening day at Fenway in 2001, paid scalpers a huge sum of money for outfield tickets and cared for me during a painful time with Acts 29- for which I will always be grateful).

Driscoll's offensive statements in MD were surrounding a woman on the panel declaring God "had no penis." Driscoll was offensive, brutally funny and quite unimpressed with the controversy (we discussed it ad nauseum in the hall afterwards). I remember wayyyy too much from the Seattle, Spencerville and Arlington Young Leader's regional meetings in 1999.

*btw- I am having a little fun with this (nothing more), hoping to reminisce with others (my only agenda)
Posted by DJ Word at 24.3.08

I challenge the absolute certainty of anything but will agree with you that mark probably said that in seattle. Mike was the one who dropped that quote via email and i assumed it was DC .. oh well, driscoll out of control in many cities. I left out the details of Seay crazy mad at me for challenging his ordering lobster and $25 bottles of wine and pagitt and I almost getting in a fight because pagitt defended seays right to order lobster and $25 bottles of wine on Bob Buford

love the name of this blog by the way

I'm sure that there were many conversations that were 'complete shit', but that's what Mark D. said in Spencerville re: the God/penis panel discussion. I certainly wasn't in Seattle, so I couldn't say anything about that.

well there you have it:

driscoll said shit in every city

Mike, thanks for the reclarifying clarification . . . .

El Mol- I am honored by your presence. If I had not put in that I was completely sure and remembered things differently, no one would have come to comment at this lil blog. I am such a whore.

Mike- I do remember the comment from Driscoll. I had read it different. I thought you were telling El Mol that Driscoll had called the THE conversation (which would become Emergent) shit. That is what Driscoll had elevated things to by time Seattle came around.

While in DC he called the "God has a penis" conversation shit.

In Seattle, some hippies had sprinkled water on people from pine trees and called it worship. Driscoll was pissed and had the floor for the final time afterwards. He called the whole thing shit and said that this needed to be about "The Gospel" and not all this other crap.

Ahhh, the good ole' days. I did not know we were together in DC without knowing it.

Like you Mol (but on a lower level), there are some funny details I could add. I don't know why I added these stories.

I think you're on the money. I was at the Minneapolis and Denver regionals, so I missed the shitstorm in the other cities. It was in DFW, just after that regionbal, when Driscoll visited Axxess and dropped the F-Bomb on Cecil's congregation. And, from what I've been told, it was definitely Seattle where Driscoll made his most misogynistic statements, followed by a blow-up about who could charge what to LN, and why there weren't hotel rooms for some of the (former) Group of 20. Cecil and Andrew Jones ended up sleeping on Driscoll's floor, without so much as a blanket or pillow.