warning to my readers- sports posting ahead 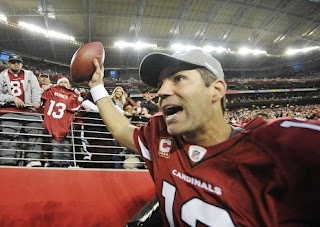 I am happy for blogger, drummer and Arizona Cardinal fan, Zach. But, he has only suffered through the pain of being an Arizona Cardinal fan*. I, on the other hand, have suffered through the lifelong stigma, frustration, embarrassment and resignation of constantly explaining myself as an Arizona AND St. Louis (football) Cardinal fan, one that has never lived in Arizona or St. Louis. Most St. Louis fans' hearts did not follow the Cardinals, plus they got the Rams a few year later. So, my NFL experience has been more painful due to misplaced loyalty.
While my friends in elementary, middle school, high school and college were cheering the Dolphins, Cowboys and Steelers, followed by the Bucs, Jags, Redskins and Falcons (almost as bad), I had resigned myself to my poor choice at 6 years old of the Cardinals. It was simple. My dad took me to the Baseball Hall of Fame where I fell in love with Stan Musial. He was called Stan the Man, as was the writer of the comic books I liked. I liked red. I liked birds with tall crests. My dad grew up in Daytona watching the Cardinals minor league team, seeing Stan Musial pitch. I was hooked.
Naturally a child of that age in an area with little pro sports (the Dolphins were the only pro sports franchise in Florida) does not make logical decisions. So, if I liked the Cardinals in baseball, I would like the Cardinals in football. The other choices, Cowboys and Steelers were deemed trendy (and I am glad I did not pick the Cowboys- I learned character unlike Cowboy fans). I did like the Dolphins too, until they beat the Cardinals 55-14 on Thanksgiving Day in 1977. I have disliked the Dolphins since that day.
Over the years, as the follower of a pathetic franchise, I have learned to care for other teams. I loved the 49ers for a long while, until Young, Rice and Montana were gone. I went through a mild infatuation for the Raiders in middle school due to the uniforms and a fellow named Plunkett, but got over that quickly. I cheer for the Bucs and Jags, knowing one of those would be my team, had I been a bit younger or less loyal and I love the Patriots, living there when Bledsoe went down and a youngster named Brady took them to the Super Bowl. The only other warm spot in my cold heart is for the Packers, my dad's favorite growing up and the place I could watch Favre play (plus, their uniforms are always my favorite).
So, there you have it. Way too much knowledge into why I picked a perennial loser, one I have traveled straight from Fort Worth to Tempe to watch play, seen for free in Dallas a number of times, because no one wanted the tickets and even seen in Tampa (every pro football game

I have ever seen- 6 in all- has included the Cardinals). I was happy in 1998 when we were a wild card and beat the disgusting Cowboys (they have not won a play off game since we have). I am ecstatic now, even if we get beat in the first round.
Congratulations to the NFC Western Division Champs (the worst division in football)... Your 2008 Arizona Cardinals!**
* I do laugh at the irony of all the Arizona fans talking about their first hosted playoff game since 1947 and their first division championship since 1977. Like any of them, not originally from STL (like 100 of you), have any stake in that history.
** I am almost happy for the Bidwell family, the ones that ran this franchise into the ground and whose patience for building a winner was misplaced in favor of quick fixes that never worked. Thanks to the Bidwells for picking Whisenhunt as coach, allowing Green to pick Larry Fitzgerald, giving me Boldin (sign him to a longterm deal worth lots of money). Thanks to Coach Ken for yanking Matt in favor of Kurt and knowing how to keep the talent happy.
Posted by DJ Word at 8.12.08

If you "learned character" by means of (the Cardinals) losing then I have, as a Cowboys fan, been learning lots of character for over a decade.

I concur with Brandon...although not nearly as much character building as you endured at those Cowboy / Cardinal games we witnessed at Texas stadium! I still say your trek to Tempe - was the classiest sports moment I've witnessed in a fan - props!