My Redneck Past (and your musical education) 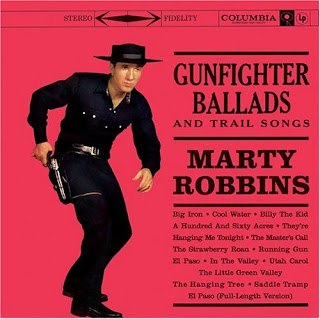 As I have been making my way through Tom Moon's 1,000 Recordings to Hear Before You Die, I am finding lost albums and artists I have loved and forgotten about, one being the late great Marty Robbins. Robbins, an iconic country music legend died in 1982 before he could experience a resurgence along the lines of Johnny Cash, Merle Haggard, Loretta Lynn or Waylon Jennings.
Growing up with a father that loved everything about classic country music, I was well versed in the wonders of Marty Robbins, my dad's favorite. His 1973 album Good'n Country which has been out of print forever is one of the lost gems of music. My dad burned it up on our 8 track and it was one of the reasons I rebelled against country music and found other genres.
It was not until I was older that I rediscovered my lost past, the country music of my childhood. Hating everything modern Nashville stood for, I had learned to dislike county music. But the stuff I remembered from my dad was unlike anything I heard (and hear) when I turned on the radio. It had more in common with punk, alternative rock, folk and Americana, extolling the glories of bad attitudes, lost love and innocence and twang, miles away from the cheap sentimentality that are hallmarks of modern country.
As I delved into my redneck past, I realized that very little music is better than country music from the 50s-70s. I also realized that this music I had rebelled against had seared itself into my consciousness and my blood. I eventually took a job at a country music station and made my dad happy once more.
While in grad school I even found this lost gem of Marty Robbins in a local used record store for $20. I made the guy play it loud in the store much to the chagrin of my roommates.
As I grew older I found myself drawn to the alt country crowd and music, understanding that they were direct descendants of the musicians of my childhood while the Kenny Chesneys and whomever else Nashville is pimping stood in the shadows of American Bandstand, direct descendants of top 40, not the art of country music.
So, as I admit my redneck past, let me give you a glimpse into my most favored of all Marty Robbins songs, one that very few people have heard and even fewer remember (but I remember every little line even though I have heard it only a few times in the past 25 years and not once in the past 15, until today). You may not like it, because you don't get it. But, here is Marty Robbins singing Twentieth Century Drifter.
The album many consider his best is Gunfighter Ballads and Trail Songs which has some of the best outlaw country you have never heard. I was listening to it today on my iPod (see, my music taste is so much cooler than yours- I listen to dead country singers).
I also recommend these songs you can hear on YouTube The Hanging Tree, Big Iron,  A White Sport (and a Pink Carnation) and his biggest song, El Paso:
Posted by DJ Word at 6.1.09

did you ever see the music video for el paso that the short running show Fridays made? all of the characters were chimps. at the time, I thought it was very funny. and my brother and i have always loved that song.

I looked everywhere and could not find it. I found a couple of places that supposedly had it but it had been removed. Any luck on your side?