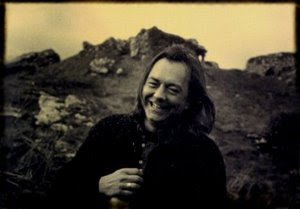 Rich Mullins is not the official band of Emergent. He is the Musical Daddy or Poppa of Emergent (the musical Lesslie Newbigin). Rich is the official band of narrative theology, along with someone higher on the list.
A guy with a legendary bad mouth (heard it myself) and a propensity for fine food and drink, Rich also was a simple living missionary to the Native Americans that did not designate himself Protestant, Catholic or Mainline, but an amalgamation of all of these traditions long before anyone else was doing it (he had a strong Quaker heritage). An advocate of social justice before it had taken root in the CCM community (and I still wonder if it really has), he could be considered the official band father of the entire New Monastic movement, too. He created such a community based upon the life of Assisi well ahead of today's proponents. He was truly a man ahead of his time, even if by only a decade or so.
I was lucky enough to spend time with Rich a few times over the years and his authenticity and oddness were a relief in the cookie cutter CCM/ Seminary/ Youth Ministry world into which I had entered. Whether it was a detailed discussion of fingernail clipping etiquette, roaming around a record store looking at Ry Cooder albums, being encouraged to mooch off his record company's expense account, telling a youth minister friend of mine to keep his pants on when he is with girls in his church, extolling the virtues of very specific alcoholic drinks or expressing his love of Bill Mallonee's songwriting while watching VoL at its height at a dingy Nashville club in 1994 (my #1 experience), I am more grateful than anyone can realize that I stumbled into his limelight on a few occasions as a goofy seminary student and young youth minister with nothing to share besides an open mind and laughter at his bizarre stories (including a classic about how hard he worked to get sent home from school as a child).
Rich was an artist that allowed me to feel comfortable that I did not fit within the confines of the Evangelical subculture I had found myself in. He gave freedom to those around him with his spirit, his example, his stories, his music and the profundity of his lyrics, which are still the high water mark of Christian music. He set the bar so high that talented artists like Derek Webb will never quite attain it and wannabes like Todd Agnew will miss the point all together.
His journey was like that of the Emerging Church movement. He began as a talented behind the scenes guy, trying to fit into the Christian scene. His first few albums were pretty mainstream, but gave us glimpses of something more. Even a corny song like Awesome God was special at the time. He was attempting to contextualize the great hymns of the past in modern language.
However, he quickly learned to move beyond that, pushing lyrics towards the disturbing, the obscure and the sublime found in the deepest corners of Scripture. He seemed fascinated with the dark edges of the Bible and theology, which many of his listeners ignored or missed. His music embraced traditional forms not heard by Christians outside of Appalachia and his albums became much more conceptual and thematic, culminating in the masterwork A Liturgy, A Legacy and a Ragamuffin Band (a juxtaposition of Christian liturgy and American heritage) and the under heard musical based upon the life of St. Francis, Canticle of the Plains (setting Francis in America's West- he loved messing with myths).
Like Jeff Buckley (to whom he is always connected for me), he left a perfect piece of art unfinished at his death, an examination of who Jesus was in all his humanity and perfection. It could have been a perfect companion piece to the works of Wright, McLaren and (name your own favorite). His influence is felt not only in the music world (Waterdeep, Derek Webb and Caedmon's Call, etc.), but in theological circles and among many preachers and emerging leaders. Very few musicians have had such a wide range of influences, especially in a relatively short career. The shame is that because of the Christian ghetto, he was missed by many music fans that would have embraced him.
Mr. Mullins, you are always missed. The world has a little less light without you and you left it much better than you found it. You are the poppa of so many of today's artists, theologians, musicians, preachers, and missionaries.
Posted by DJ Word at 30.3.09

Well done Rick. You've managed to put into words the influence, the legacy, and how I have always felt about this man call Rich. Thank you.

i love it when these reviews get really personal. this is beautiful.