The 77s are not the official band of Emergent. They are Emergent's cool uncle that never succeeded to his potential because he was unwilling to sell out and has been forgotten about when he should have been seen at the harbinger of the entire thing. In fact, what I said of Bazan has been said of and by Mike Roe, leader of The 77s on many occasions, that his music is "too holy for the world, and too worldly for the church."
The 77s problem is one of timing. In an internet age with myspace, iLike, Pitchfork and Paste, they would flourish. But when they began, there was no forum to express spirituality in popular music unless you were Irish/ British or black. For a bunch of church kids from California making exciting music, there was only one place; the burgeoning Christian Music scene, one that swallowed up some of the best musicians of the era: Charlie Peacock, Jimmy Abegg, The Choir, Daniel Amos, Gene Eugene and the best of the bunch- The 77s.
None of these bands should have been used for proselitization or Evangelistic purposes. Like Bono without proper guidance, they were not propagandists, preachers, salesmen for Jesus or called to "help God across the street like a little old lady." They were talented musicians with vision, passion, chops, pop sensibilities and the talent to thrive in the alternative/ college music scene of the 80s and 90s. They were artists that just happened to love Jesus and would express that in their lyrics. Instead they were relegated to church basements, festivals and the occasional college radio hit, snuck in by a closeted Christian disc jockey (i.e. ME).
After two of the most exciting things ever produced on a "Christian" label and blowing the mind of weird Christian kids everywhere, The 77s were poised for greatness with an Island records signing and great reviews in Rolling Stone. Alas, it never happened. That self titled album is something I have discussed with the old guard in the Emerging church and each can express their appreciation for an album that expressed Christian spirituality in a manner so real they had never known it was possible. These guys expressed what was really going on inside most of us. We did not feel the Amy Grant songs. But, we felt The Lust, The Flesh, The Eyes and The Pride of Life. Fir that, we will always be grateful. The 77s did more for my spirituality than any preacher or youth leader before I turned 21.
The music stretched boundaries and could be hard to keep up with. Classified as an alternative rock band, there were shades of Pet Sounds-era Beach Boys, Zeppelin, traditional blues and soul, Cheap Trick (I consider The 77s power pop at its best) and the 80s college rock of R.E.M. Lyrically, they started out with traditional Christian themes, but much more interesting in their execution (first Christian band I can think of to deal with abortion, teen pregnancy, binge drinking or Edgar Rice Burroughs in a song). They moved to more confessional lyrics, dealing with the grays of human experience, doubt, anger and longing. Even their songs about Scriptural themes had more in line with theologians such as Hauerwas, Volf, Moltmann and Brueggemann (I believe they were there intuitively, not because they were reading those theologians in the late 80s and early 90s) than Max Lucado. Like truly great artists, The 77s were ahead of the cultural curve (which kept them out of popularity in Christian circles) and precursors to the emerging church conversations.
Bands that get to sing about spiritual matters and sell records at the same time should call up a guy like Mike Roe up and thank him for paving the way. The rich ones should make sure he has insurance. Without guys like him, bands like mewithoutyou and Underoath would not be on Alternative Press, record companies like Tooth and Nail would not exist, Sixpence and
Switchfoot would not top the pop charts, David Bazan would not get to decide if he wanted to be a "Christian" artist or a mainstream artist and Cold War Kids and Sufjan Steven would not have top billing at alternative rock festivals around the nation.
Which is a shame for The 77s, because I would put their output between 1983 and 1995 up against anyone else's during that era. Mike Roe has the pop sensibilities of Brian Wilson, the guitar God chops of Jimmy Page, the gifts for lyrics of John Lennon and a creative streak on par with Roger Waters. He was a chameleon with a voice that could sing any genre effectively. Too much talent and too little audience. He needed Paste magazine to exist 10 years earlier.
Mike Roe and The 77s cannot be the official band of Emergent because their heyday is pre-Emergent. They are like those theologians, pastors, missionaries and professors that pioneered new forms and expressions of historic Christian faith and spirituality underground, toiling away with little fanfare, but paving the way for the popularizes, the guys and women living on the edge and influencing everyone by making art as good as, if not better than U2, R.E.M. and The Cure, bands that should have been their equals. 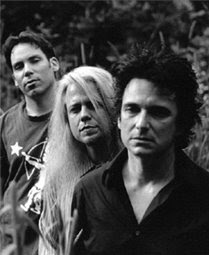 I need to stop because talking about how good the 77s were, how under appreciated they were, how influential they are and how important they are to the emerging church conversation. It saddens me because they toiled in the shadows for years and have been forgotten.
The 77s on myspace
Posted by DJ Word at 26.3.09

i was just thinking about their _pray naked_ album the other day. sooooo good...

did i miss any reference to leslie phillips in the 80's - esp her _the turning_ album?? that was BRILLIANT as well.

Wow...what a well written tribute to one of my favorite bands of all time - this needs to be shared to a wider audience...Thanks for posting Rick...

Great review of a great band. I can't wait to get home tonight and dig out some of my old 77's albums. My love of music started after I thankfully found these guys.

The 77's are still around, releasing albums and touring. And thankfully they are just as good as they once were.
Mike Roe is also a member of the Lost Dogs, one of the best bands to roam the planet.

Great post as always Rick. I have been a fan of theirs since day one. Part of me wonders what would have happened if Joshua Tree hadn't been so huge. Would Island have helped out the 77s more than they did? I have this feeling that Island let them fall through the cracks because they were frothing at the mouth with U2/Jtree (and I'm a big U2 fan as well). Has anyone heard Holy Ghost Building? I'll put that up against "Raising Sand" by Plant and Krauss any day. Rick? Were you ever able to make any of the 77s shows that were at the Floodzone back when you were in Richmond?

Anonymous- is this Will? I would never forget that show. It may have been my first 77s show. I got the first 3 albums (on vinyl) signed.

Billy- I do remember those shows at the Flood Zone well, especially how late they went, because the 77s were a real rock band that did not like to start a show before 11PM. My fave was the show with the Prayer Chain, in which I think the PC actually blew them out of th water.

I will check out the latest. I have not heard it. I remember getting Joshua Tree and the 77s album within a few weeks of each other. I do wish Island could have multi tasked. Same thing happened with Capricorn ignoring VoL when 311 got big.

Holly- I am mad at you. Now I have to go back and detail why I did not add Leslie/ Sam Phillips to the list (and lie, since I really forgot her).

always nice to make someone mad for a good reason. :)

Be sure to let me know what you think of Holy Ghost Building when you get around to purchasing/listening to it. That record was a labor of love that took more than 2 years to complete amidst our busy lives. Although an album full of covers, it's still one of their best works.

Anyway, thanks for the kind words about the band and thanks for your continued support! Be on the lookout for a Mike Roe solo album in the (relatively) near future.