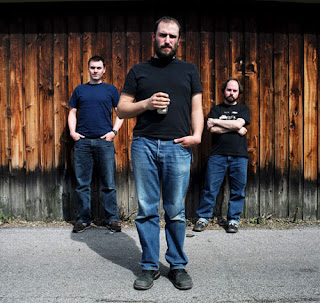 David Bazan and his defunct band Pedro the Lion are not the official band of Emergent. For the life of me I cannot come up with a reason beyond, "I'm just not that into them." If I were to designate them, I would call them the official band of escaping the Christian Ghetto while maintaining your identity.
I appreciate the effort Bazan has put into artistic integrity, maintaining his Christian identity, but refusing to market or co-opt it for acceptance by Christians, who could give his career a boost if they choose. He has also resisted the pressure to go underground with his faith to gain acceptance in the music industry. He could find more success had he chosen the Dashboard Confessional route of emo-ish popular songs devoid of faith components. He has chosen the sticky middle ground in which he is "too Christian for radio and too secular for the church" or however the quote goes. This is a hallmark of the emerging church experience in which there is no false dichotomy between what is sacred and secular, what is acceptable to speak of what is not. This non-acceptance of the popular notion of what makes something Christian is the reason Emergent lives in such tension.
This quality makes Bazan and his band important for the future of the church and Christianity, especially art.
Bazan's strengths lie in his lyrics which are quite interesting, dealing with subjects as random as band life, pornography, fidelity and alcohol. He deals directly with real life and its struggles in ways few other artists of faith (main exception Bill Mallonee) choose. In fact, I see him as the direct descendant of Mallonee's legacy. Like Bill Mallonee, Bazan is a story-teller choosing to weave spirituality, hope, darkness and theological reflection through the lens of a musical novel rife with complex characters. If he were not from Seattle, I would swear he is in the lineage of Welty, O'Conner and Percy, all important writers for emerging Christians.
The reason he is not higher on the list is the music and his voice. Over the years I have attempted to get into Pedro the Lion over and over, knowing it is a hole in my experience. I own 4 albums by them and like them all, but I love none. An old friend of mine is an original member of Pedro and gave me great insight into the band, but it did not help me. I agreed with all he said, but cannot get over Bazan's voice, which is surprising since I like odd voices. His laconic vocal approach, coupled with the low-fi production remind me of why I was never into Pavement (blasphemy) or some of the other trendy lo-fi bands of the era (main exception Elliot Smith, but he had a great voice which changes the equation). With Bazan, I feel as if he needs less beer and more coffee. Kick it up a notch.
Listening to Radiohead this morning, I realized that Bazan's music is much like Radiohead's melancholy slow stuff, without the Yorke vocals, or even more directly Sea Change-era Beck with better lyrics and less interesting artistry. It became evident to me that I need a different vocal styling to create some tension between what is being said, how it is being said and the soundtrack behind it. When all are the same it becomes a bit boring. Change on factor and music becomes much more interesting (at least to me).
Anyway, I have lost focus. Bazan's strengths as an artist outweigh his weaknesses, enough to put him in the top 10 of Emergent bands, slightly ahead of Beck (now, if we could mix both of their strengths in a blender, we would have a perfect Emergent band).
Posted by DJ Word at 25.3.09

"He has chosen the sticky middle ground in which he is "too Christian for radio and too secular for the church" or however the quote goes. This is a hallmark of the emerging church experience..."

this is so true. it reminds me why so many of us consider buechner a patron saint.