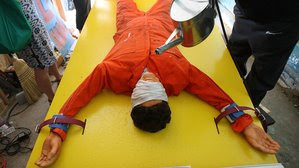 "It is way worse than I thought it would be, and that's no joke," Mancow told listeners. "It is such an odd feeling to have water poured down your nose with your head back...It was instantaneous...and I don't want to say this: absolutely torture."

"Absolutely. I mean that's drowning," he added later. "It is the feeling of drowning."

"If I knew it was gonna be this bad, I would not have done it," he said.

While I was away this weekend I missed something you may have caught. If so, please forgive the redundancy.
Self described Right Wing radio host Erich Muller from Chicago subjected himself to what Sean Hannity has refused to, waterboarding. He participated in the stunt to prove once and for all that waterboarding is not torture, and not that big a deal. Like torture supporter Christopher Hitchens, he came to the conclusion that... (surprise) Waterboarding is torture. You know Hannity won't do it, not because he is scared to try it, but because he knows what the outcome will be. It is easier to condone a behavior such as the torturous waterboarding if you have never experienced it.
So, all you waterboarders, join the fun and give it a try. The summer will be hot and dry so you could use a cup of cold water poured over your face. I am sure it will be refreshing.
Here is the article about Muller's experience, plus video. By the way, the water pouring lasted only 6 seconds before he gave up (or 5 seconds longer than Hannity or I would last).
Posted by DJ Word at 26.5.09