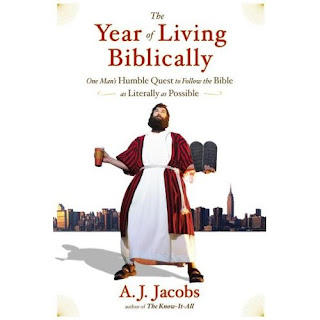 I have been meaning to give my impressions of A.J. Jacobs The Year of Living Biblically for a while. Interestingly, I found this book a few months before release.

I was perusing (yes, I love that word wayyy too much) the local used bookstore and came across an Advance Reader's Copy of a strange little tome I had not yet heard of. I quickly scarfed it up and promptly added it to my "hopefully to get around to some day" pile. I forgot about it until it entered popular conscience with a vengeance (which, according to the book would not be a particularly positive thing).

Anyhoo, I found the book quite good- though not "otherworldly." Jacobs writing, while above average, is not in league with memoirists such as
Rob Sheffield. I have read too many self aware New York writers with gifts for words. This is not Jacobs' strength. His strength lies in his utter fearlessness as an existentialist and as a writer. Not content with a sissified 30 Days experiment ala Morgan Spurlock, he jumps in to the deep waters of Religion fully clothed with no swimming lessons and only a thousands of year old and very hard to understand manual.

Due to his lack of knowledge of many spiritual matters, including quite a few Jewish customs he had little understanding of as a non-Bar Mitzvahsed Hebrew, we are taken on a crash course in how strange our faiths must look to non-Adherents, even those as open minded as Jacobs. His insight comes from his naivete and confusion. That he is able to stay married and sane is a triumph. That he is able to express such simple truths in a way even the most thick headed Christian can understand is a miracle.

During his experiment he participates in a disturbing sacrificial ritual involved a chicken and lots of Hasidic Jews, writes letters to Smuckers to make sure they don't harvest fruit trees too early, realizes he would rather raise a Flanders than a Bart Simpson, is tortured by an interview with Rosario Dawson (one of the funniest sections of the book), finds commonality with Creationists, Amish, snake handlers and members of Falwell's church, stones an adulterer (he had it coming), learns to thank God for the little things, helps circumcise his twin sons and realizes faith is impossible without community.

There are many great passages I think Christians should read (if they don't not read the entire book), including some I wish I had time to put here. Every pastor or minister should read the book, especially those that have been in the bubble so long they have little understanding of the secular mind-set. In fact, A.J. (whom I feel like I know after reading this book) should make a living off coming to churches and telling us how he sees our strange rituals. While it is by no means a perfect book (in fact, i could spend a few postings on its weaknesses), those things matter little.

Read this debate between Jacobs and a Christian journalist on Slate (it is hilarious). link
Read an excerpt. link
Read the rules he must follow. link
How you and I can live Biblically (buy sandals, goat's milk, a harp, myrrh, a staff, an olive oil lamp, a robe and kosher crickets). link
Posted by DJ Word at 15.11.07

sounds good, rick. have you finished everything must change yet?