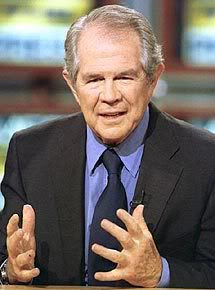 Upon hearing news that Advocate magazine has named Atlanta the gayest city in America, Pat Robertson released a statement declaring a retroactive curse upon the city. While this is his first such announcement, Robertson assures his viewers that such curses are regular weapons in God’s arsenal.

“Atlanta has been cursed for being the gayest city in America. In fact, God preemptively cursed the city by sending General William T Sherman to the city in 1864 to burn it to the ground,” said Robertson earlier today. He continued, “God, in his foreknowledge understood that Atlanta would one day embrace an unrepentant gay lifestyle, so he judged it, cursed it and destroyed it almost 150 years before the city would understand the curse. America's God has the option to act unilaterally and preemptively when needed. Today we understand why.”

When asked for comment on other cities God destroyed,especially during Sherman's campaign of destruction, Robertson said he would have to get his research team, comprised of grad students from Regent University, to dig through documents to figure out what God was cursing them for. ABC’s Rock Chinley asked about slavery to which Robertson responded, “that was not the reason for God’s curse. Sure it was the stated reason for Northern aggressors, but the southern states did not understand the issue as we do today. It is much different and God only curses homosexuality, liberalism, Devil Worship and the ACLU."
thanks to my friend Krystal for inspiring the idea for this post
Posted by DJ Word at 22.1.10

Andy Borowitz, eat your heart out!

Sweet! I just saw my name in print - I'm so excited! You might want to update the date in the title though ;)

good catch. You inspired it, so I can't act like it was mine.