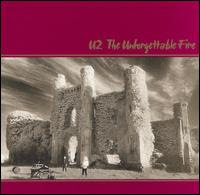 Wow, this list took me down a path of really important memories! Thank you.

What is up with U2 being on David Letterman for several consecutive nights?

I think they are on DL for an entire week because they have a brilliant management and a record company willing to do whatever they want, plus this increases Letterman's ratings daily when new stuff is happening at NBC (then add in a new albums for U2).

That is some serious synergy.

I'm really glad to hear you liked ATYCLB so much, because I have always thought it was a great album, but I didn't know how it was received by the U2 purists.