fighting the power 20 years ago today with Spike Lee 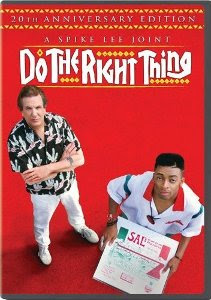 While reminiscing about previous July 4ths, Kristi and I found huge holes in our memories regarding the holiday. Not being particularly patriotic people and not having a great love of fireworks, we have had so many quiet Independence Days that we have forgotten most. Sure, I remember the Esplanade in Boston or the crappy Tomb Raider flick, even Mexican food with friends and a couple of parties, but that is about it, except for a couple of distinct memories, one from exactly 10 years ago and another from exactly 20.

I mentioned our July 4th plans for 1999 in my last blog, spending time in both in the city and in Schaumberg with our Arab friends. However, 20 years ago I remember the music I was listening to and the movie I saw on July 4. Why? Because this week they released the 20th anniversary DVD of a life changing movie moment for me.

ok, can you believe i have not seen this movie? i guess i have an excuse the first time around, since i was only 16. add it to our netflix queue, please, honey.